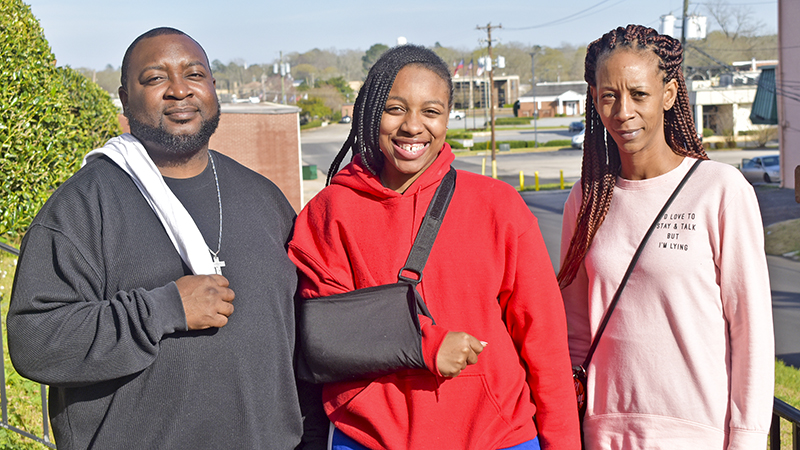 DOING FINE: From left are Lewis Madden, Alyse Madden and Shay Brown. On Feb. 28 on a basketball court in West Point, Alyse Madden was injured in a driveby shooting. Authorities have since arrested Zion Areontez Lynch, 18, of Lanett, on five counts of attempted murder among other charges. Photo by Rashad Milligan

LANETT — Basketball is a way of life for 15-year-old Alyse Madden.

The 5-foot-10 Lanett High School sophomore is one of the standout players on the school’s girls basketball team, averaging 14 points per game this past season. However, on Feb. 24, a day on the basketball court took an unexpected turn — one that she could’ve never imagined.

“When we were at the basketball court, everybody was out,” Madden said. “It was a pretty day. We were about to get into a game, and as soon as we started playing, I shot the ball, and then he shot the gun.”

Madden was hit in a series of shots from a drive-by shooting.

Two men have been arrested for their alleged involvement in the shooting.

Stefon Tramell, 19, is currently in the Troup County Jail on charges of aggravated assault and conspiracy to commit a crime (felony).  Zion Areontez Lynch, 18, of Lanett, is facing four counts aggravated assault, one count of aggravated battery, one count of possession of a firearm in the commission of a felony, four counts of conspiracy to commit a crime, and one charge of cruelty to child first-degree because Madden is a minor and under the age of 16.

“When I felt that I got shot, I didn’t know that [the bullet] came all the way through and went out,” Madden said. “I remembered all the stuff that people have gone through when they get shot. The bullet hits them, and then it travels. They panic, and it hits the other side, so I tried to stay calm.”

“I knew that every little thing that I could do, like talking slow to take that extra breath could help me stay alive because I can’t die yet,” Madden said.

The bullet came out two inches away from her main artery, which likely would’ve killed her before the ambulance got to the scene.

“I was scared to death when I got the phone call,” said Alyse’s father, Lewis Madden. “When I first saw her afterward, [I saw that] she’s a fighter. She’s OK.”

Madden’s mother, Shay Brown, said that she remained calm throughout the entire situation.

“It had to be to stop someone else from being hurt because she wasn’t going anywhere,” Brown said. “She has a mark to make. It had to be impossible just because of who she is, her motive for God keeping her here.”

She hopes to play at a major women’s college basketball program like Tennessee or Connecticut. She used to play with the LaGrange Warriors AAU team, but this summer she’ll join the Alabama Hawks in Lanett.

“I want everybody to know that we appreciate everybody,” Lewis Madden said. “From the city to the friends, her coaches, her church, they kept her up. They kept me up.”

Madden is currently sporting a sling over her right arm, although she tried to take it off to do a crossover with her right hand earlier this week.

She even visited the court where the incident occurred Thursday, where she said she was initially paranoid but became accustomed to being back at after a while.

The family hopes Alyse will return to school on Monday.