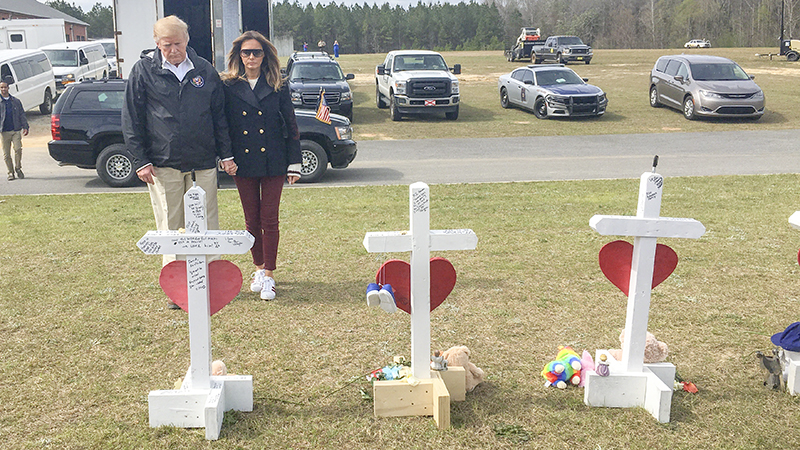 President Donald Trump and Melania Trump stopped to honor each of the victims in Beauregard on Friday. --White House Press Office

By Dustin Duncan
The Valley Times-News

BEAUREGARD — During his visit to Beauregard Friday, President Donald Trump spent considerable time in front of each of the 23 crosses beside the roadway, each one meant to honor a victim of Sunday’s deadly tornado.

Holding the hand of the First Lady Melania Trump, Trump spent several moments in front of each cross, touching each one delicately. Each of the crosses were decorated with hearts, stuffed animals, flowers and several messages.

Air Force One landed at Lawson Army Airfield in Fort Benning at 11:45 a.m. and Trump was greeted by Georgia Gov. Brian Kemp and his wife, Marty Kemp. After short pleasantries, Trump turned to the crowd, pumped his fist in the air to acknowledge their applause and boarded a helicopter to Auburn University Regional Airport.

During the 25-minute flight, the president received an aerial tour of the areas impacted by the tornadoes.

The president’s motorcade arrived in Beauregard just before 1 p.m., passing several damaged homes and neighborhoods that were destroyed Sunday. Several residents of the area flocked to the streets to take videos and photos of the president passing through, including signs that read #BeauregardStrong and “Welcome President Trump.”

While surveying the damage, Trump met with several families who lost loved ones during the storm, including the family of Marshall Lynn Grimes and Sheila Creech. The family showed the president Grimes’ motorcycle vest and Bible, and Trump responded by hugging the family.

“I saw this. And it’s hard to believe,” Trump said. “You saw things that you wouldn’t believe.”

Also while surveying the damage, Trump commended Ivey as well as FEMA.

At 1:30 p.m., the president visited the Providence Baptist Church where dozens of families crowded in an auditorium filled with clothes, toiletries, diapers and backpacks. At the church, the president was joined by Secretary Ben Carson, Alabama Sen. Richard Shelby and U.S. Rep. Mike Rogers.

Carson touted the work of local officials and first responders who got to the scene of the storm immediately.

“The support that we have gotten from local responders is unimaginable,” he said.

Trump met privately with several families in the church auditorium and afterward, he told the volunteers he wished he could have gotten to Alabama sooner.

“We couldn’t get here fast enough,” Trump said. “I wanted to come the day it happened.”

He said Ivey asked the president to give them some time to clean up the area beforehand.

“We love you all,” Trump said. “We love the state of Alabama.”

After speaking at the church, one of the volunteers, Ada Ingram, said Trump coming to Beauregard will bring the community closer together.

“I’d vote for him again,” she said.  “I enjoyed him coming. I think it’s a Godsend. I’m sorry. The situation is bad.  And there are going to be people who will say why did he come to my town.  I don’t know why. I don’t know why the tornado happened. But there is a reason.”

Ingram said she knew 10 of the people killed Sunday.

Lee County Bill Harris announced Thursday that Poarch Band of Creek Indians of Poarch, have donated $184,000 to cover the funeral costs of all 23 victims killed in the tornado.

On Friday, former NFL player for the Dallas Cowboys and Denver Broncos DeMarcus Ware committed $10,000 to be used for grave markers for all victims.

“When I heard the news, I didn’t know where to start, I just knew I had to do something,” Ware said in a news release. “We are coming up on ‘DeMarcus Ware Day’ (April 19) in the state of Alabama and when that proclamation was declared three years ago, I made a vow to always do my part to protect ‘Sweet Home Alabama.’ All things considered, this donation is small in comparison to the devastating feeling of burying a loved one. I look forward to making an even bigger impact in the weeks to come as relief needs continue to be assessed.”

Ware was born and raised in Lee County.

Lafayette Ballet Company to present ‘Once Upon a Time’