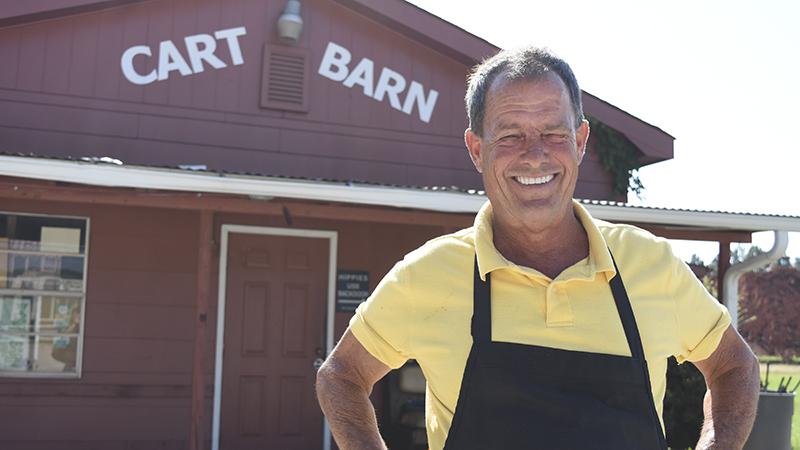 Tony Bishop, longtime owner of The Cart Barn, passed away over the weekend. - File

EDITOR’S NOTE: This story has been updated with the correct visitation date.

Bishop and his brother, Terry, started The Cart Barn restaurant in 2003. For 15 years, Tony was the chef, the entertainment behind the grill and ran the day-to-day operations of The Cart Barn.

Before The Cart Barn, Tony spent many years at the now-closed In Clover restaurant and at Highland Country Club as part of a four-decade-long career cooking for people in Troup County.

“He was determined and had a passion for cooking and making people laugh,” said his son, Shawn. “He loved people, and he did something he really enjoyed.”

Tony hinted at retirement for many years, but kept working through the restaurant’s move from Whitesville Road to Jefferson Street in 2018.

“I wanted to be retired, but we had to try to get something going for my son so he can have a business, and retirement wasn’t in the books,” Tony said in an interview with the LDN in April of 2018.

It didn’t take long for the restaurant’s longtime customers to find their way to the new location and regularly fill the business, and Bishop retired at the end of 2018.

“It has been a little over two months now since he retired,” Shawn said. “He was playing golf and went to Florida a couple of times.”

In February, Tony returned to cook for Valentine’s Day, a special evening at The Cart Barn.

“He said that was his last hoorah,” Shawn said. “He did the Valentine’s Day dinner with me. We did a special reservation dinner for Valentine’s, and that was the last time he cooked in the kitchen.”

Not surprisingly, seats filled up quickly for Valentine’s Day.

“He was just always so upbeat, so outgoing,” said longtime friend Shane Frailey. “He was a businessman. When you went into his business, he always came out and spoke to everyone and made you comfortable.”

Frailey said if anyone in LaGrange ever mastered the restaurant business, it was Tony.

For nine years, Tony groomed Shawn to take over the restaurant when he retired. They spent many days and nights behind the grill together.

“It’s tough business being in the kitchen together,” Shawn said. “You are so stressed out doing everything. We’d butt heads a lot, and we had a lot of arguments in the kitchen, but always at the end of the night we’d hug each other and tell each other we loved each other.”

Shawn said he’s kept the menu the same and will always remember his father’s work ethic.

“I never understood how much work he really put in, because he made it look so easy,” Shawn said. “It’s more than I ever thought it would be. It’s a tough business.”

Tony Bishop, 63, had been playing golf Saturday before his unexpected passing. Along with Shawn and Terry, he leaves behind two daughters, Joy and Melissa, and longtime girlfriend Beth Stein. A visitation service will be held  Thursday from 5 p.m. until 9 p.m. at Striffler Hamby Funeral Home.

“He was a real good man, and he had a big heart,” Shawn said.

Shawn said The Cart Barn will be closed for several days.

One dead in weekend industrial accident at Powertech