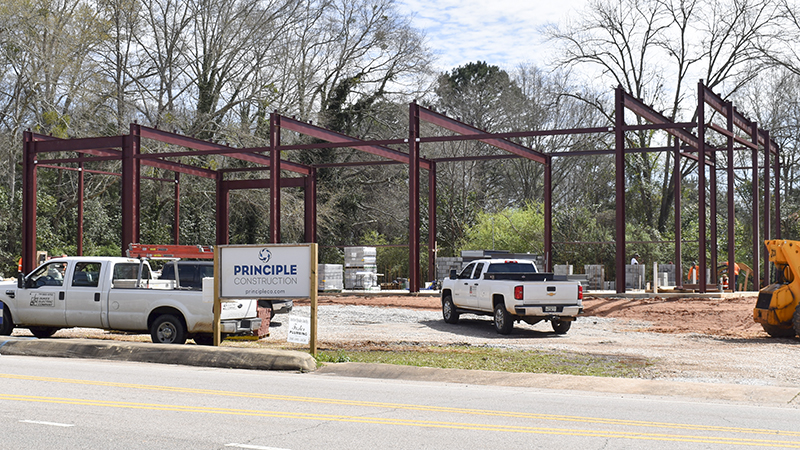 Construction continues on the fire department’s station 5, which is being built on Vernon Road. --Alicia B. Hill

Both new structures will be funded through the Special Purpose Local Option Sales Tax. The new fire station was initially approved in hopes of maintaining the city’s Insurance Service Office Score, which puts a strong emphasis on response times. Like many local projects, Station 5’s construction was delayed by high rainfall in the winter, but Brant was optimistic that the project will soon see major progress.  The new station is located on Vernon Road, near the hospital.

“Station 5 is being built now across the street from the hospital,” Brant said. “The rain has dampened that progress a little bit, but I talked to Skip Smith yesterday and talked to Principle Construction. We can look to see some heavy progress in the next couple of weeks. Once we get the top on, the sides on — when we can get inside [the weather] won’t matter as much then.”

The LaGrange Fire Department plans to hire seven new employees once Station 5 is built in order to have enough employees to cover all of the stations.

According to the LFD annual report, the department had 61 employees in 2018, 52 of which were allocated to fire suppression and emergency medical response. Brant said that he also expects to see significant progress on the LFD’s new burn building, which will be used to train city and county fire fighters.

“They are starting to move on that, and we should start seeing some ground breaking next week,” Brant said. “Most of that will be built off-site, and when they get everything done, they’ll move it in.”

The structure will replace an old burn building that was showing signs of wear due to the training exercises.  During 2018, LFD personnel participated in 20,936 hours of training, with the majority of that training focusing on driver/operator, emergency medical services and officer development, according to the LFD annual report.