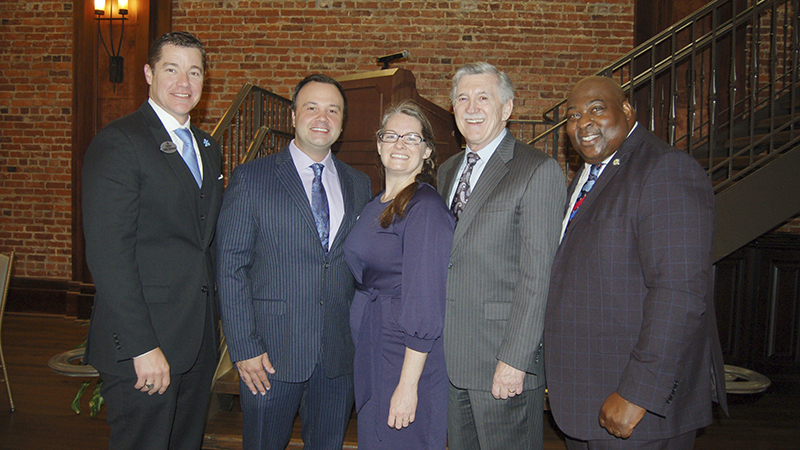 On Tuesday, Merrill Wilcox and Dr. Steve Dollinger of the Georgia Partnership for Excellence for Education (GPEE) presented the overview of a six-month study done in Troup County during the March Early Bird Breakfast.

The study was done to create a clear picture of the county’s Asset Map, or the workforce pipeline that exists locally, and give a fair analysis of the strengths, resources and gaps in that pipeline.

The overview session was followed by a more in-depth discussion of the results, and both touched on the strengths of the area, as well as a realistic snapshot of where the county is today in terms of its workforce and an analysis of that snapshot. While the tools may prove helpful, the GPEE representatives made it clear the responsibility is on the citizens to take these ideas and run with them.

The GPEE identified a number of areas that were designated as “needing immediate attention” for early childhood students, K-12 students, post-secondary students, work and career professionals and disconnected adults.

One of the areas that received the most focus during the Early Bird Breakfast was the third-grade reading scores, which are in need of improvement.

“The major milestones in the K-12 system are broadly considered to be third grade literacy scores, eighth grade math, graduation rates and CCRPI,” Wilcox said. “Third grade literacy in particular, because that is the year where teachers have to stop spending all their time teaching kids to read and the kids need to be reading at a certain level to do well in their other classes. If you’re behind in third grade reading, even if you’re good at math, when you have a reading math problem in fourth grade, you will fail without that reading base. We have the data, we know the longitudinal impact of how third grade reading scores effect students until graduation.”

The Troup County third grade literacy rate has been a point of emphasis for some time and are consistently beneath state averages, which are objectively low to begin with, hovering around 40 percent.

Other areas of need that were addressed included access to a 24-hour daycare for the large population of shift workers in the county — currently there is only one — the attraction of 18-35 year-old residents and the need to forge trusting relationships with the disconnected adult population in Troup County.

There was more positive than negative in the presentation, however, as strong community assets were noted throughout each age demographic such as the Little Library program, THINC College and Career Academy, The Thread, the Servant Scholar Program, Calumet Village and the Racial Trustbuilding Initiative.

“There are a lot of good things to build on,” Wilcox said.

“If the people in this room would give it everything, you could make Troup County be a spotlight not just in Georgia, but around the country,” Dollinger said. “You have some phases that are strong, but some are weak that could be stronger. You also have some real assets in Troup County.”