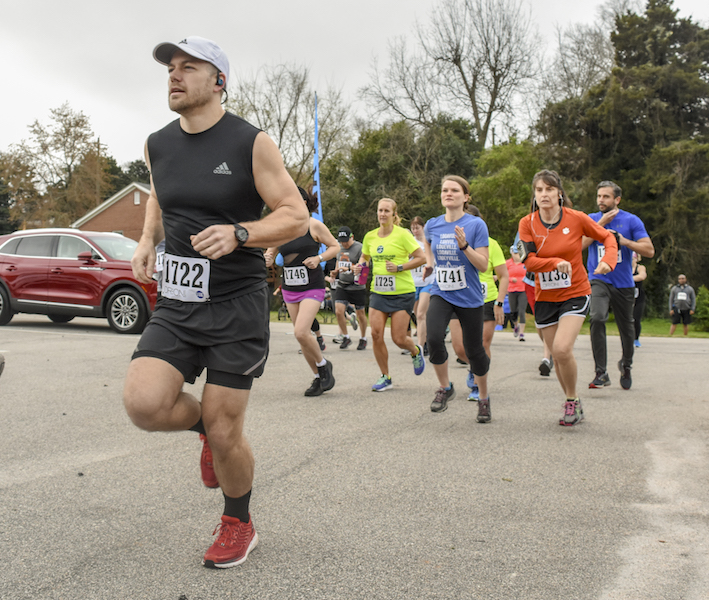 Clint Chaudoin takes part in the Chick-fil-A Awesomesauce 10K that was held on Saturday. - Daniel Evans

“We’ve continued to get more sponsors and bigger groups,” Bowman said. “We moved it to The Thread to incorporate that in it, which is awesome. We liked having The Thread be a part of it since it’s such a big part of this town.”

Mary Beth Pelt, volunteer coordinator for the camp in LaGrange, said 257 children took part in last year’s camp. She said the goal for this year is to have 320 children take part.

“We have title sponsors and organizations around town that donate money to this race, and we use that money to scholarship students who might otherwise be able to go to camp or need assistance financially with camp,” Pelt said.

Many families took part in the race, something Bowman said is important to Chick-fil-A.

“That’s what Chick-fil-A is about, growing families and how important family is. We do a daddy-daughter date night, a mother-son event, the race, the Winshape camp — it’s all revolved around the kids, family and parents,” he said.

The 20 or so runners from First Baptist wore shirts picturing the Belchers and Alvin, who regularly ran the race.

“This is in memory of them,” said friend Carol Kilgore.

The Winshape Camp in LaGrange will take place from June 3-7. For more information, go to camps.winshape.org. Pelt said volunteers are always needed.