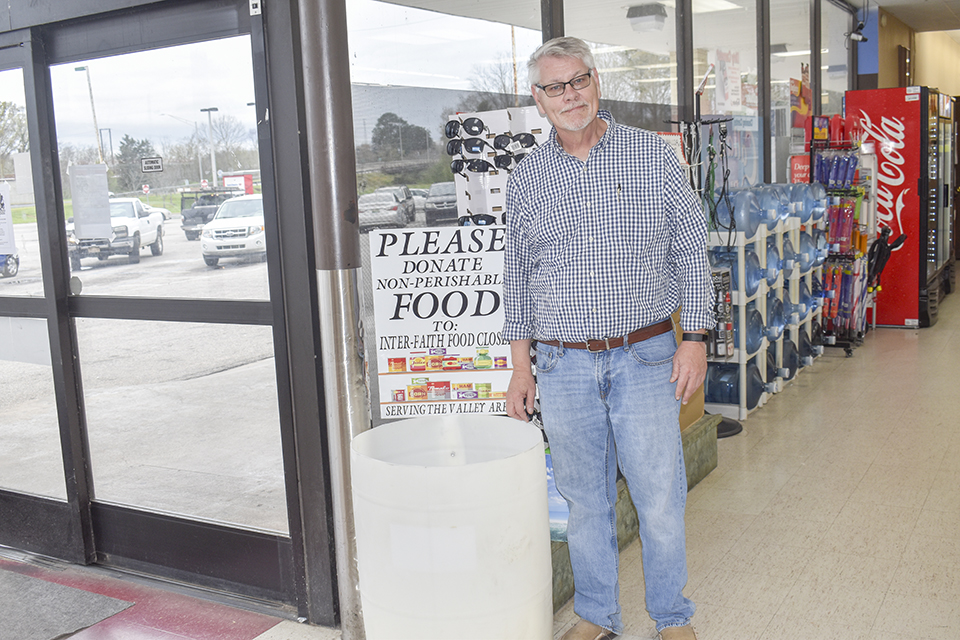 WEST POINT — The Interfaith Food Closet in Valley is giving individuals in the community more opportunities to help those in need.

At Givorns Foods in Valley and West Point, there are donation bins at the entrances of each store. Those bins have been set up for donations for the food closet, according to the Interfaith Board Chairman Donnie Ervin-Brown.

Ervin-Brown said the idea came from Bob Lemons of Valley, the bins were donated from Super Wash in Lanett, while Norman’s Sign Shop created the sign above the bins.

He said Givorns Foods employees have agreed to donate $1 a week per employee for every week the bin is in the store.

The food closet has been in operation for 35 years in the Greater Valley Area and is made up of more than 20 churches within the region.

“We do emergency food,” Ervin-Brown said. “It’s for anybody who finds themselves in need of food. We help them out.”

He said all a person needs is a driver’s license or state identification card and a proof of residency. They don’t perform a financial assessment.

“If somebody comes in and says they are having a financial emergency, we give them food,” Ervin-Brown said.

He said individuals in need could come to the food closet six times a year without board action. After a sixth time, he said a board member needs to sign off on additional food.

Typically, people get food for about five days, and it’s usually items such as bread, eggs, pasta and vegetables. Ervin-Brown said the number of people in the family determines how much food is handed out. The families also get a recipe card that goes up to a family of eight, which shows how to stretch the food for five days.

Ervin-Brown said the organization serves more than 350 people a month, which is about 100 families. He said it usually comes out to about 1,400 meals per month.

Most of the food is purchased by the food closet through monetary donations through the churches but also through grants. There is also a major food drive every year through the U.S. Post Office.

“It is just a call and a need,” Ervin-Brown said. “We have two purposes. One is to give emergency food and also to give opportunities to churches to give back to the community.”