Marching for a stronger community 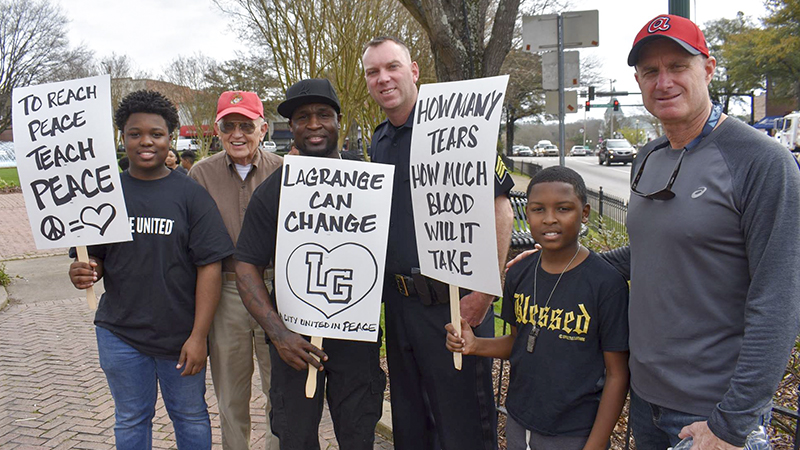 With one march under their belts, the United Leaders of Georgia are already planning a second walk to promote community and stop violence.

On March 9, the United Leaders of Georgia hosted a walk that began in downtown LaGrange to bring awareness to gun violence in the community, and on March 23, the group will continue its efforts with a March and Grill beginning at Grady Street Park. The group was glad to see a good turnout at its first event, and hopes even more people will be able to attend its second march.

“It was wonderful. We had a large group show up, and we actually had 67 people complete the march with us,” said Anthony Talley, one of the group’s founders. “The youngest was 4 [years old].”

United Leaders of Georgia was founded by Talley, Thaddeus Dowell, Leon Childs and Quay Boddie earlier this year, and every step that they have taken so far has had a reason behind it, including the route of the first march, which lead participants through some of the areas that need more attention from the community.

“We want to shed light on the conditions that the neighborhoods are in,” Talley said. “The sidewalks are busted. You have trash everywhere and rundown houses, and I [feel like] if we want to get violence to go away or go down, we have to build up these communities and give them something to take pride in.”

The group said that the first march drew attention even from those who did not take part, and it helped cement their bond while raising community awareness.

“As we were walking, we had people literally stopping traffic with their phones out taking pictures,” Boddie said. “You had people coming to their door looking out with their phones trying to see what was going on, literally cheering us on, saying ‘keep going, keep up the good work.’ That gives you a certain sense that there is hope.”

The group hopes to continue to spread that hope in the neighborhoods near Troup Street.

“On the 23rd of this month, we’ll be doing another march on the west side of town,” Talley said. “We’ll be grilling afterwards.”

The march will begin at 11 a.m. at Jones Street Park and will continue through the Bell Line neighborhood. The United Leaders of Georgia hope the march and chance to break bread as a community will help the neighborhood come together, even as the City of LaGrange works to make requested infrastructure improvements by adding more lights and security cameras. However, the United Leaders of Georgia hopes that its efforts will reach far beyond one or two neighborhoods.

“The violence is not just in Bell Line, I think there needs to be a revitalization of the parks,” Childs said. “But, I think we also need to be coming up with programs and other kinds of mechanisms that we can use that will enhance the activity of these kids to give them something to do, so that their minds won’t be so idle to get in trouble.”

The park where the march begins and ends is also under consideration for updates, but a plan for the area has not been announced at this time. The leaders said that they hope that children ages 2 to 18-years-old are kept in mind during park renovations, while allowing space for senior citizens as well.

“If it is done the right way, it will be a great asset to that neighborhood because it will give the kids something to do,” Talley said. “If you go there right now, it looks abandoned, so it really needs to be revitalized.”

The United Leaders of Georgia’s March and Grill will take place on March 23 at 11 a.m. and will begin at Grady Street Park. Food will be provided at the park for free to the community after the march.