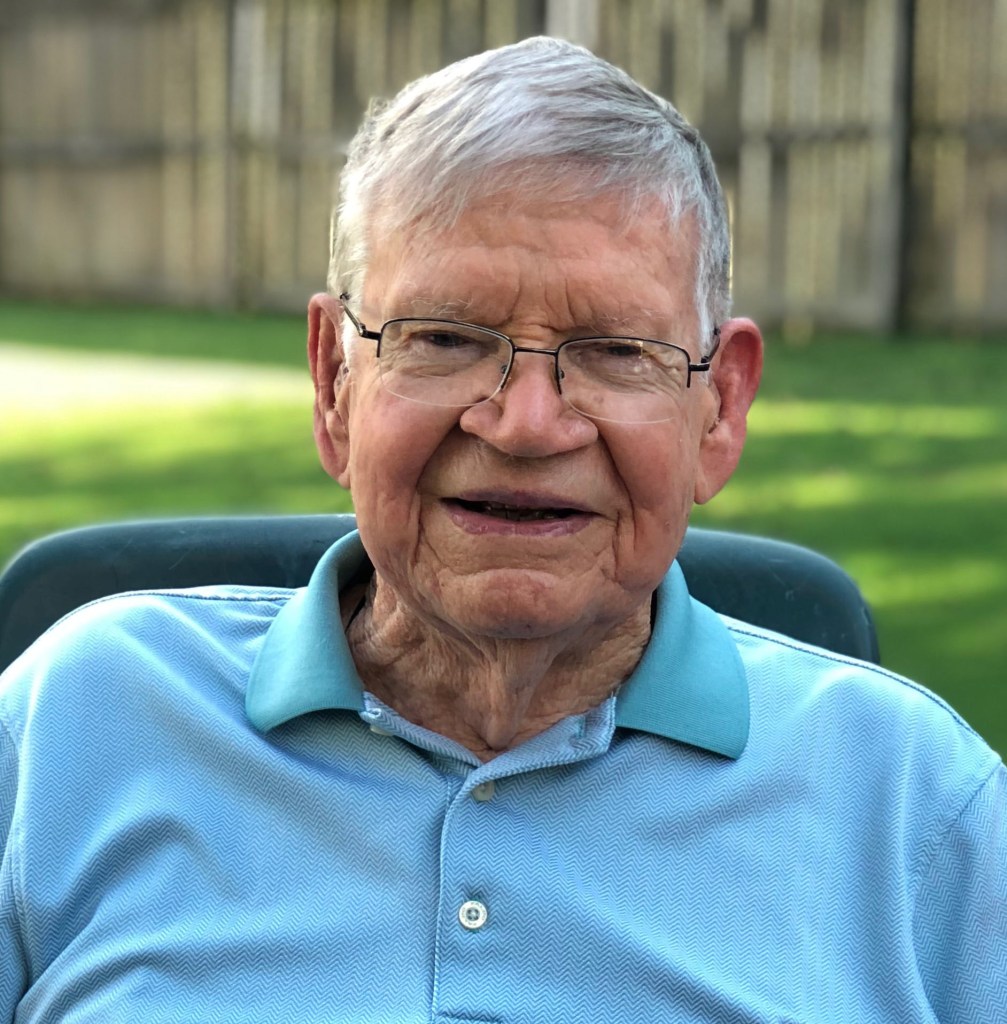 He was the son of H. Grady and Margaret Callahan. He grew up in Athens , graduated from Athens High School and then from the University of Georgia. He was a dyed-in-the-wool Bulldog fan!

He was drafted into the U.S. Army Air Corp in World War II within a week of his college graduation and served in the 92nd Bomb Group (H), 8th Air Force. He spent 34 months, starting May, 1942, in the European Theater of Operations. He was discharged with the rank of Major. He then married the former Elizabeth (Betty) Hodges in 1946 and spent 64 wonderful, happy years together until her death in 2011. Grady worked as a quality control supervisor in the textile industry in LaGrange, Georgia, for over 37 years before retiring in 1989 to enjoy a very pleasurable life with his wife.

In Georgia, Grady was an active member of St. Marks Episcopal Church in LaGrange, serving on the Vestry a number of times in addition to other volunteer organizations — Scoutmaster and Cub Scout Master of Boy Scouts of America, Junior Achievement, Literacy Volunteers of America and Meals-on-Wheels. He was an avid golfer, an avid reader, loved all sports and loved life. His best personal attribute was his constant positive attitude. His three greatest loves were God, family and country, in that order.

He chose to move to the Little Rock area in 2013 to be near his daughter’s family and spent ﬁve fun-ﬁlled years playing golf, going to Greers Ferry Lake and to the beach, and generally loving family! He became a member of Park Hill Presbyterian Church in North Little Rock after moving to Arkansas and lived at Parkstone Place, an independent living facility until the time of his death.

He is preceded in death by his wife, Betty; and is survived by a son, Henry G. Callahan, III (Douglas Beauchamp) of Marietta, Georgia; and a daughter, Margie Burton (Darrell) of Sherwood, Arkansas; granddaughters, Kristine Vargas of North Little Rock, Arkansas, and Elizabeth Moe (Craig) of Minneapolis, Minnesota; two sisters, Florence Lee of Ashville, North Carolina, and Nell Loveless (Don) of Snellville, Georgia; a brother, Tom Callahan (Connie) of St. Augustine, Florida; as well as many nieces and nephews. He delighted in his five great-grandchildren, Kendall Vargas, Roxanne, Charlie, David and Luke Moe. Poppa will be terribly missed, but he will forever be in our hearts.

The family would like to particularly thank Linda Little and Geraldine Davis, his loving caregivers at Parkstone Place and the Central Arkansas VA Healthcare System for their outstanding medical service that kept him with us for several extra years. The family would also to especially thank Vanessa Anthony and the entire VA Urology Unit, Becca Wilson and the VA Surgical Unit, Diane, Angela and Marissa in the VA Palliative Care Unit, the complete VA Home Health Care Unit, the professionals in VA ICU Unit, and the doctors and staﬀ at the VA Audiology and Low Vision Clinics.

In lieu of ﬂowers, memorial donations can be sent to either Park Hill Presbyterian Church, 3520 JFK Blvd, North Little Rock, AR 72116 or to St. Mark’s Episcopal Church, 207 N. Greenwood St., LaGrange, GA 30240.  Memorial services celebrating Grady’s life will be held April 5 at 2 p.m. at Park Hill Presbyterian Church, North Little Rock, Arkansas, with Pastor Marie Mainard O’Connell oﬃciating and on May 4 at 2 p.m. at St. Marks Episcopal Church, LaGrange, Georgia, with the Rev. Allen Pruitt oﬃciating. He will be cremated and interment will be in the Columbarium of St. Elizabeth’s Garden at St Mark’s Church in LaGrange, Georgia, next to his wife.