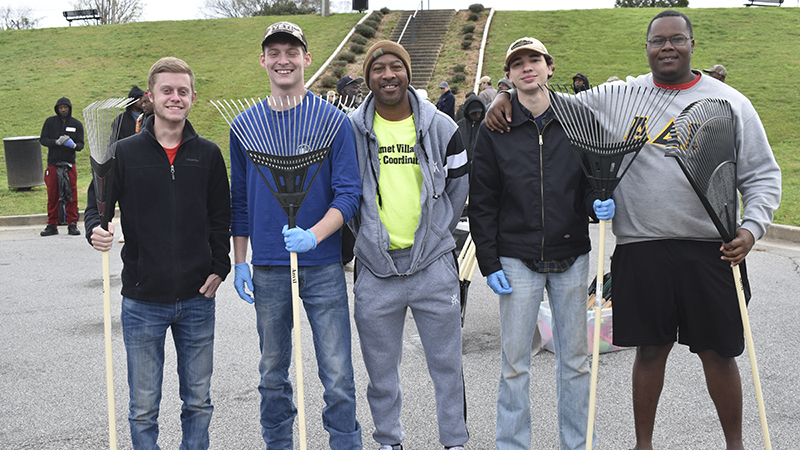 Approximately 100 LaGrange College students took part in a service day in Calumet Park and the surrounding neighborhood on a chilly Saturday morning, partnering with residents in the community for a clean-up project. The event brought LaGrange College’s undergraduate population into the community and saw them spread out throughout the Calumet Village neighborhood in teams led by community members to help beautify the area.

Ricky Dozier, president of the Calumet Village Neighborhood Association, spoke to the positive impact of the presence of the college students in the village, but said he hopes the effort and impact of the neighborhood’s revitalization spreads to other areas in LaGrange.

“It’s amazing,” Dozier said of the service day. “We’re trying to get everyone more involved. We don’t want to just bring the college kids in, we want the whole neighborhood to join us. Hopefully what we’ve done here and are doing here will go back into other neighborhoods, and they catch on.”

Calumet Village has been the subject of positive revitalization in recent years in large part due to the work of individuals within that community who have taken ownership of the neighborhood.

A strong partnership with the city has since evolved, and the LaGrange City Council has since invested in the community as a result of the neighborhood’s strong internal leadership from the likes of Dozier and Dr. Robert Tucker.

“We have a long way to go, but I think we’ll get there,” Dozier said. “Our vision here is to get the young kids involved and get them a direction. The elderly people whose livelihoods aren’t what they used to be, we want to help them out as well. It starts here in our community, we want young kids to see what we’re doing and start leading them in the right direction.”

The students who attended the service day represented a plethora of organizations on campus, all of which understand the importance of engaging with the local community.

“With LaGrange College, a common theme is service,” said junior Kevin Millevoi, a member of the Alpha Delta Gamma fraternity.

“With this being such a small community, the college always wants us to get out. There is a really big push for all of the organizations on campus to get out and serve.”

“I live here in LaGrange, I’m from LaGrange, it’s nice to get out and help our community,” said sophomore Jalen Morgan.

Dr. Kelly Veal, assistant professor of clinical mental health counseling and clinical coordinator at LaGrange College, was happy with the student turnout for the event. Veal has a personal connection to the neighborhood as well, as she also serves on the Calumet Village Neighborhood Association board, and believes service projects such as this play a pivotal role in partnering the college with the community.

“This is very important,” Veal said. “These events are instrumental in creating connections between the community and the college. To have students be a part of revitalization, to partner with community members is so important. They’re also building community and building relationships. This is a great day.”