The LaGrange Police Department is asking the public’s help in locating Elease Reed, a 27-year-old black female, who was last seen on North Cary Street on Sunday.

According to LPD, Reed has contacted her family since she was initially reported missing on Sunday, but the case will remain open until LPD can verify her wellbeing. 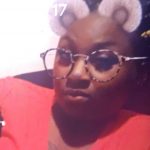 If you have seen her or know of her possible whereabouts, please contact the LaGrange Police Department at (706) 883-2603 or call 911.

*** Update: On Monday afternoon, LPD reported that Reed had been found.