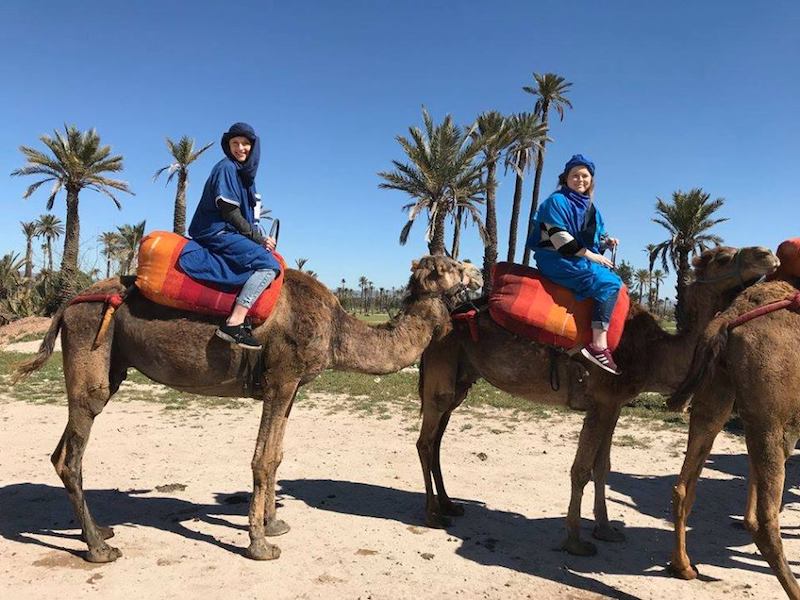 Jenna Brown, left, takes a camel ride in Marrakech during her time teaching at a school in Casablanca. She will talk about her experiences at a 3D Journeys lecture at LaGrange College on Monday. - Contributed

With her graduation from Berry College rapidly approaching in 2016, Jenna Brown began looking for a job in early childhood education. That search took her to a place she had never imagined.

“It happened all of a sudden,” said Brown of her decision to take a teaching job in Morocco, a predominantly Muslim country in northwest Africa, a place she knew next to nothing about.

A friend had attended an International School Fair and gotten a job within two days. More jobs were available, the friend advised Brown, including a second-grade position in Casablanca.

Faster than you can say “passport,” Brown found herself signing a contract and making plans to move more than 4,000 miles from LaGrange, where she grew up and attended Lafayette Christian School. She broke the news to her parents, Greg and Sherri Brown, after the ink was dry.

“We were stunned,” Sherri Brown recalls. “Jenna was a kid who had trouble staying all night at church camp.”

Jenna Brown spent the next two years on the faculty of the American Academy Casablanca, a sometimes exhilarating, sometimes exasperating time during which she experienced major culture shock and overcame language barriers, in addition to the normal challenges of guiding a room full of 8-year-olds.

Now finishing up her first year in an American classroom, the 25-year-old Hollis Hand kindergarten teacher will share her experiences in Morocco as the March speaker at LaGrange College’s 3D Journeys lecture/travel series, “Magic of Morocco.”  Her talk, entitled “From Camels to Rainbows:  Two Years in Morocco,” is set for 10 a.m. Monday in Turner Hall.

“I am really looking forward to it,” Brown said. “I learned so much from my time there, and I’m so glad I did it. I grew as a teacher and as a human.”

The opportunity to live abroad “sounded cool,” Brown said, laughing as she reflected on the spur-of-the-moment decision. “A lot of people have told me I was brave, but looking back, it was both brave and naïve.”

Casablanca, with almost 4 million people, ranks as one of the most crowded cities in the world, with a population density of 14,200 per square kilometer. Brown admits she didn’t like it at first.

“It was so loud, I couldn’t sleep, but after a while I got used to it,” she said.

Brown’s school provided housing that was safe, adequate and came with maid service, a nice perk, but she found the working conditions less than stellar. Seven teachers left during her first term. Brown had some tearful Facetime conversations with her parents, but stuck it out.

“It’s not for everyone. I’m proud of myself for staying.  It would not have been good to run out on my first teaching job,” she said.

Besides, she found joy in the hugs and accomplishments of her students, a blend of Moroccan and international children from Spain, Colombia, Turkey, China and elsewhere. The school practiced “English immersion,” meaning she taught math, reading, science and social studies in her native tongue, even though some students spoke no English at first. She learned “survival Arabic and French” and leaned on locals who worked as classroom assistants. Her second year, she had four boys who spoke no English at all at the beginning of school.  By year’s end, they were all reading, writing and speaking English.

Coworkers became friends and locals invited her into their homes for visits and holiday observances. She experienced Ftour, the traditional evening meal with which Muslims end their daily fast at sunset during Ramadan, the Islamic holy month. Another time, she was a guest for Eid, an important religious holiday that marks the end of Ramadan and involved the slaughter of a sheep.

“The people are open and caring and hospitable,” Brown said. “Their level of hospitality even puts Southern hospitality to shame.”

She also found it easy to travel inside Morocco, known for its geographic splendor, visiting beaches (where camels sometime roam), mountains and desert. And she travelled several times to Europe, something she could not have done as readily had her first job been in the U.S.

A year back in the States has been welcome, but Brown is not through with international travel.  She’s already signed on to teach next year in China, in a not-for-profit school in Shenzhen, a modern city of more than 12 million just north of Hong Kong. This time, she’s done more homework and feels confident she can handle whatever lies ahead.

“I’m going to take some of my things from Morocco to China,” she said with an impish smile, “to make it feel like home.”

In a way, she added, Casablanca did become her home.

“I had a lot of firsts there. It was the first place I was an adult.”

3D Journeys series lectures are free and held at 10 a.m. on the fourth Monday of January through April in the Dickson Assembly Room in Turner Hall. Parking is available at Sunny Gables Alumni House, 910 Broad St., with shuttle service to the door. An optional Dutch treat lunch is available in Pitts Dining Hall following each lecture.