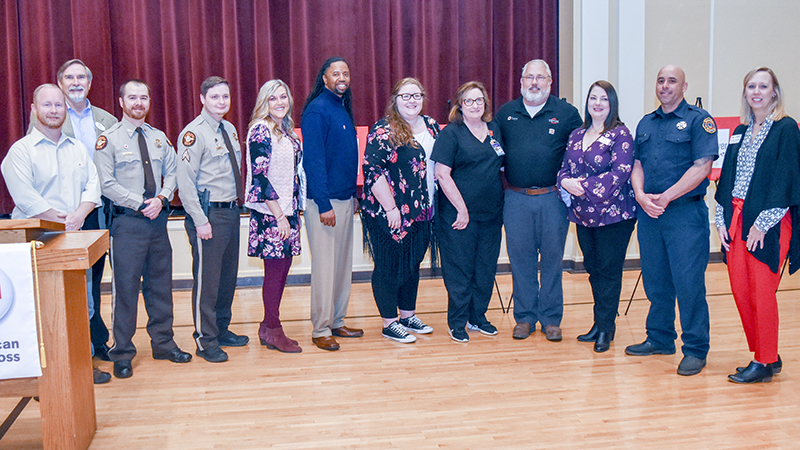 Before Corp. Michael Hockett and Deputy Anthony Smith could sit down after being honored at Thursday’s Breakfast of Champions, a woman jumped up and ran across the floor to give them a hug.

“I have to say thank you before you sit down, and I need a hug from both of them,” said Marie Hines. “These are the young men who came to my house and saved my husband’s life, and it was on Thanksgiving night. They should’ve been at home spending time with their families.”

Hockett and Smith were two of the ten people honored Thursday morning at the American Red Cross of Central Midwest Georgia’s Breakfast of Champions, which thanked hometown heroes for their work in the community.

Hockett and Smith were honored for saving Ken Hines’ life by using an AED defibrillator to deliver shocks that restarted his heart. His son, Jim Hines, was also honored for giving his father CPR until help arrived.

“After the second shock, the gentleman started regaining consciousness and by the time firemen showed up, he was conscious, breathing on his own and looking around,” Hockett said on a video that played during the ceremony.

Three LaGrange Fire Department employees injured during a Labor Day fire were also honored. Josh Williams and Jonathan Williamson couldn’t be there due to scheduled surgeries, but Pete Trujillo accepted his award.

“It changed our department. We’d never dealt with anything like that,” said LFD Chief John Brant. “We wanted to make sure something positive came out of something negative. We try each and every day to become a better department and move forward. This community really got behind these guys and helped in their time of need, and we appreciate all the support they received.”

The ten people honored all had different stories.

Sheree McCurry was honored for her work with organizing blood drives for the Red Cross at Calumet Bank.

“I felt like if I could pull in a few people, somebody’s surgery won’t be delayed or somebody’s family will be saved from a traumatic experience or accident,” McCurry said.

Terry Stanford was honored for helping save the life of a child who was locked in a hot camper.

“We made entry into the vehicle and got the child out,” Stanford said. “It was amazing to see the mother and child back together. It had almost been an hour that she had been locked away from her child.”

Kevin Dunn was honored for his volunteer work with West Georgia Hospice, as well as his work with the school system.

“It is very humbling. When you set out to give, you never think about the accolades or the notoriety that could come with it,” Dunn said.

A resident passed away and the nursing home couldn’t get in touch with the family, so McClendon and Whited went to the address listed.

“I think to be recognized together says a lot about the relationship we have,” McClendon said. “It was kind of shocking because it was just another night for us. We would want someone to do it for us.”