Sports management class hears from guest speakers in the field 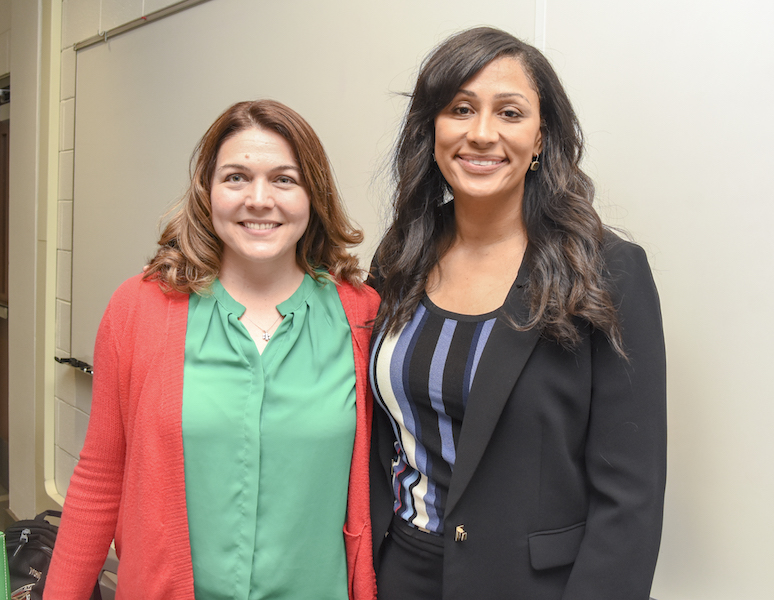 Dennette Thornton and Ardelia Austin spoke at LaGrange College on Tuesday as part of a “Women in sports industry” seminar. - Daniel Evans

Students in LaGrange College’s sports management program had a chance to talk to two experts in the field Tuesday.

LaGrange College professor Dr. Preston James hosted “Women in the sports industry,” a seminar to highlight females in sports management. Dennette Thornton, director of group sales and stadium tours/operations for the Atlanta Braves and Atlanta United, and Ardelia Austin, the director of volunteers for Super Bowl LIII, took part in a panel at the college Tuesday, answering questions and guiding students on career decisions.

Both Thornton and Austin spoke on the importance of building relationships in the sports industry.

“I got my current job because of the relationships I had. I was perfectly content to work for the Atlanta Braves for the rest of my life,” Thornton said.

Instead, Thornton received a call from the Falcons, who were creating a new position and wanted to find out if she was interested. She said she wasn’t looking for a job at the time, but her connections helped make her a candidate.

Austin was the director of volunteers for the Atlanta Super Bowl Host Committee, a position she also credited to the relationships she had built. She said students should work their way up and be confident in their abilities.

“If you want to be seen at all your events, if that’s your goal, then your work ethic usually reflects that,” Austin said. “If you’re there and you know you have something the industry needs, you’ll always work and people will always respect you.”

Austin talked about things that went well at the Super Bowl, and other items she’d do differently a second time. One of the redo’s would be ordering particular jackets, which came in at a smaller size than expected.

However, she said the exposure to Atlanta was a good thing for the city, based on numbers received after the event.

“We got a lot of accolades through the Super Bowl, and there was a report… on the impact on every Super Bowl,” Austin said. “They said 33 percent of the people who saw the exposure in Atlanta are now more interested in coming to Atlanta.”

Thornton told students sales is the easiest place to get into sports management, simply because there are often more of those positions available. She said students should also be encouraged to look at large corporations, such as Delta or Marta, that have connections to sports.

“When you’re looking for careers, don’t just assume that sports [jobs are] just with the professional teams. All of these companies have sports marketing departments within them,” Thornton said. “You look at every venue in our city and they all have some type of Fortune 500 company on it, and there is someone or a group that manages the relationship with a team.”