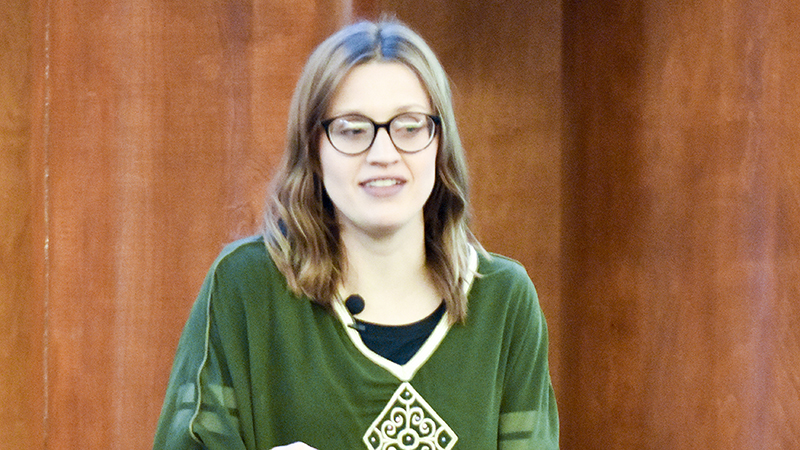 LaGrange native Jenna Brown spoke at LaGrange College on Monday about her experience in Morocco. --Alicia B. Hill

On Monday, Jenna Brown, a LaGrange native, spoke on her time as a teacher in Casablanca, Morocco.

Brown was part of a series of speakers discussing Morocco as part of LaGrange College’s 3D Journeys lectures, and as the youngest speaker in the series — who spent two years living and teaching in Casablanca — her insight into daily life in the country was of special interest to the group, which plans to visit Morocco in April.

“One of the biggest questions that I get when I talk about moving to Morocco and tell people I lived there for two years is, they say, ‘Did you feel safe?’” Brown said. “That is a fair question, right? I’m a young American woman living by myself in a big city in a Muslim country. … But the people that I met there were so kind to me and so sweet to me that I did feel safe. I did feel welcomed.”

Brown talked about the friendly people she met during her time in the country, including her favorite roadside vendor and a group of shepherds who eagerly helped Brown and a friend set up a photo with some goats, despite a language barrier.

Near the end of her time in Morocco, Brown said that she saw rainbows in the sky almost daily, which served as a reminder of the beauty that she had seen, even as she prepared to return home.

Brown answered audience questions on aspects of her experience after the lecture, ranging from her experience as a Christian in a Muslim country to souvenirs to how she was paid as an American working abroad. Brown plans to move to China to teach second-grade students beginning in August.

The final lecture in the 3D Journeys series on Morocco will be on April 22 at 10 a.m. in the Dickson Assembly Room of Turner Hall. LaGrange College Assistant Professor of Exercise Science Dr. Caleb Williams will speak on “Moving in Morocco.” Attendees are encouraged to park in the lot located behind Sunny Gables Alumni House at 910 Broad Street. A shuttle will take people to the door beginning at 9:30 a.m. A Dutch-treat lunch will be available in the Pitts Dining Hall following each session.