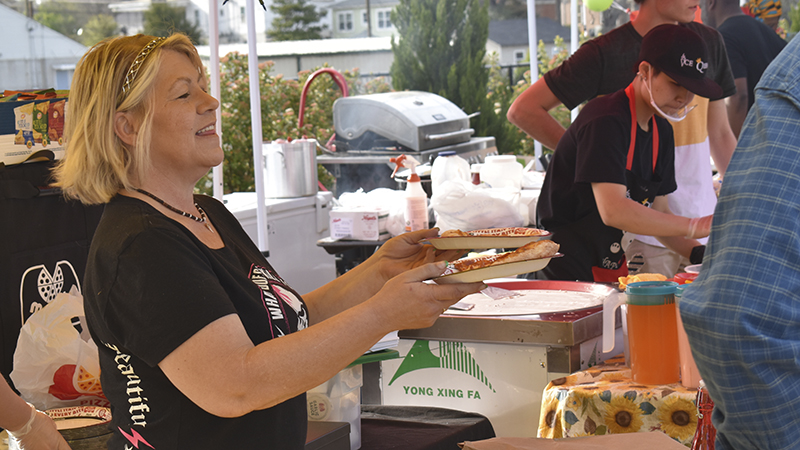 Saturday afternoon was filled with good weather, good food and drink, live music and thousands of community members mingling and enjoying the afternoon during the second annual Taste of the Town event, which was held on Overlook Plaza and sponsored by the Junior Service League of LaGrange. The event was held to benefit local non-profit Circles of Troup County.

The event started last year as the annual project for the newest members of the Junior Service League.

“Each year new members, or provisionals, are required to do a provisional project,” said Junior Service League Service Chair Nicole Spivey. “It was about 10 people who put it on last year. We met with Barbie Watts with the Downtown Development Authority. We wanted to do something similar to some events in Newnan or Columbus. This type of event was lacking in LaGrange. It was the first event of its kind last year.”

Matthew Oleson, owner of Frios Gourmet Pops in downtown LaGrange, shared that the event was a good opportunity to gain exposure as a business owner, but it held special significance for him as a lifelong resident of LaGrange as well.

“It’s fantastic, it allows us to be outside of the store more frequently and be in front of the community,” Oleson said. “But this is two-fold for me, growing up here, we didn’t have these kinds of events. Now that we do, you see LaGrange blossoming into a really unique place to live and work. It’s a pretty cool experience.”

The event saw a wide contingent of local citizens, but also drew an assortment of individuals who had traveled into LaGrange for the afternoon, including Columbus residents Edgar Chancellor, Frank Lumpkin and Marie Dixon.

“I grew up in West Point, but we’re here to celebrate a friend’s 60th birthday. We’re all meeting here,” Dixon said. “This is awesome. They should do this more often, it’s great. We should have done this when I was growing up. Bringing things back to downtown is important, it creates a sense of community. It looks like everybody is just enjoying themselves and having fun.”

“This is very important for LaGrange,” Lumpkin said. “We have a vibrant downtown in Columbus, you guys are doing the same thing we’ve been doing. LaGrange is catching up.”

The Junior Service League collect ed 10 percent of the proceeds from each vendor, which will be donated to the nonprofit of choice. The nonprofit organization that is featured will change every two years, per Spivey, and the nonprofit that has been selected to receive funds for the coming two years will be Safe Families for Children.