Life has been busy over the past 10 weeks for Maurice Raines, who until recently served as the post commander for Georgia State Patrol post 2 in LaGrange. Now, he’ll still be serving the state, but in a new role. 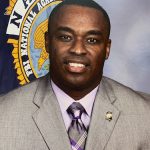 Raines was one of 251 law enforcement officers that graduated from the FBI National Academy in Quantico, Virginia earlier this month. Only 51,770 graduates have been through the academy since it began in 1935, according to a press release. Commissioner Mark W. McDonough nominated Raines for the academy, which provides coursework in intelligence theory, terrorism, management science, law, behavioral science, law enforcement communication and forensic science.

“Only 1 percent of law enforcement gets that opportunity and I was grateful,” Raines said.

Raines said he studied public speaking and executive leadership as part of his training at the academy.

“I’m impressed with the FBI Academy. It is no doubt the best law enforcement training in the world,” Raines said. “To go through an institution of that magnitude, it’s unbelievable.”

When he returned, Raines was promoted to lieutenant and given a new position as the liaison representative for the state patrol in the Governor’s Office of Highway Safety.

Raines started his new job on March 16, thus is no longer working at the LaGrange GSP post, where he spent six years as post commander. He said his replacement at the LaGrange post will be in place by April 1.

“I was grateful to serve as post commander here,” Raines said. “I’m grateful to the Troup County government for building a new facility for the state patrol and I’m glad I played a role in the new facility, and I’m glad to know the Troup County and Harris County governments have always been supportive of the state patrol under my leadership. I’m expecting the next commander to pick up where I left off and take it to higher heights.”

Raines said anyone who would like to talk to him can reach him at mraines@gsp.net.