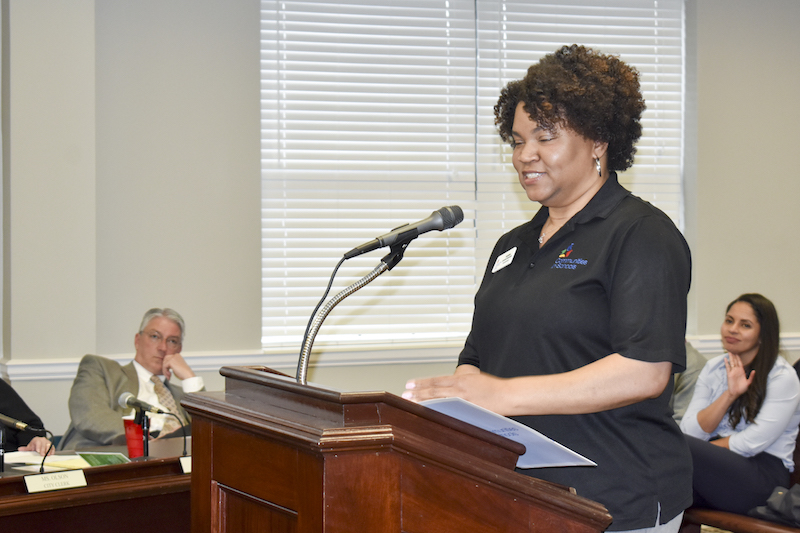 Tabitha Coverson, the executive director of Communities in Schools of Georgia in Troup County, updates the LaGrange City Council on Tuesday. - Alicia B. Hill

On Tuesday night, Communities in Schools of Georgia in Troup County provided an update to the LaGrange City Council. Council discussion of the update was limited, in part due to the meeting occurring immediately following a 9-hour council retreat that ended just in time for the evening meeting, but the council nevertheless expressed its gratitude for both the update and CIS’ efforts in the community.

“Thank you for continuing to stand in the gap,” Council Member LeGree McCamey said.

Tabitha Coverson, the executive director of Communities in Schools of Georgia in Troup County, spoke on some of the local program’s successes and changes in the last year.

“We focus on the ABCs, which are attendance, behavior and course work,” Coverson said. “During the 2017-18 school year — the previous school year — we had 61.2 percent of our middle school students who were failing academically improve their grades. [Additionally,] 87.6 percent of students missing 10 or more days [of school] prior to CIS improved their attendance, and they gained on average 11.16 days [of school] back in the classroom.”

Additionally, 75.7 percent of students with a history of behavior issues, which resulted in suspension the previous years, improved their behavior under CIS, according to information released during the meeting. Coverson said that 24.2 percent of students who had been suspended previously were suspension-free under CIS. All CIS middle school students were able to move to the next grade, and Coverson said CIS had a 91 percent graduation rate for its students in 2018. Troup County School System’s graduation rate was 84.1 percent for that year, and the state average was 81.6 percent.

Coverson said the program served 2,649 students in the past year. CIS provides services to those students with the help of 45 community volunteers, who provided over 3,851 hours of service to students in 2018. However, students weren’t the only one who received attention under CIS programs.

“We also provided direct services and parent engagement to support 592 parents,” Coverson said. “Those are parents who were not and had not been engaged at all with their students, so that is a big deal because accountability is a big piece of it. We can work our fingers to the bone during the school day, but if we send them to a home with a parent who is unengaged, it is like we are starting over every single day.”

CIS has hosted a variety of events, including Reality U events, at CMS to teach the students how their decisions will impact their lives. Coverson said CIS plans to host a session at LCMS soon. CIS’ Emerging Leaders attended a LaGrange City Council work session in January, and CIS plans to celebrate 30 years of helping students on April 16.

“Communities in Schools serves a really big role in our school system, and we are very thankful for the work that they do,” said Dr. Penny Johnson, the assistant superintendent of curriculum instruction and professional learning for the Troup County School System. “They do a really good job.”

CIS received $30,000 in funding from the City of LaGrange for the 2018-2019 budget year, which Coverson said was leveraged to receive grants to further fund the program.

Other items covered by the LaGrange City Council during its meeting on Tuesday include: