A LaGrange couple whose community service has touched virtually every aspect of local life will be honored as grand marshals of the 2019 Sweet Land of Liberty Parade on July 4.

H. Speer Burdette III, recently retired president of the Callaway Foundations, and his wife Debbie Dennis Burdette, a longtime literacy advocate and former school board member, will be saluted at the 35th annual parade in downtown LaGrange. Both Burdettes are LaGrange natives. 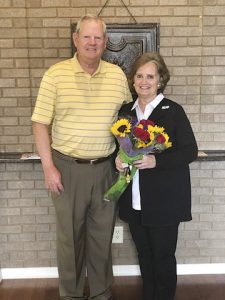 Speer and Debbie Burdette have been nominated to be the grand marshals of the 2019 Sweet Land of Liberty Parade on July 4. – Contributed

The theme for the parade is “Bright Stars, Bold Stripes, Brave Hearts.”

“We are thrilled to recognize these two ‘bright stars’ for their decades of bold leadership and brave service. The Burdettes reflect the best ideals of this country. They are homegrown heroes, but world class leaders,” said Lindsey Perkins, a Junior Service League member and parade director.

“We feel honored and excited to be asked and look forward to being grand marshals of this great community event,” Speer Burdette said.

A graduate of Vanderbilt University with an MBA from the University of Alabama, he has been both a deacon and elder at First Presbyterian Church.

“It is especially fitting that the parade begins outside Sweetland Amphitheater at Boyd Park, one of numerous visionary downtown projects completed during Speer Burdette’s tenure at the Callaway foundations,” Perkins said.

A former reading teacher, she is a graduate of Peabody College and has also been an elder and deacon at First Presbyterian.

“Children absolutely adore Mama Jama. Their faces light up at the sight of her. We are proud to recognize Debbie Burdette, one of JSL’s own, for her genuine dedication to promoting reading and expanding literacy in Troup County,” Perkins said.

Junior Service League members have been supporting the youth parade since it was founded by the late Annette Boyd, a League member, in 1985. In recent years, the league has been the primary sponsor of the parade.

The patriotic parade is held at 10 a.m. on July 4 and is free and open to anyone 19 and under.  Registration will be announced shortly.

“We urge local families to continue their support of the parade and join us as we honor America and salute the caring hearts and consistent commitment of Speer and Debbie Burdette,” Junior Service League President Katie Henderson said.