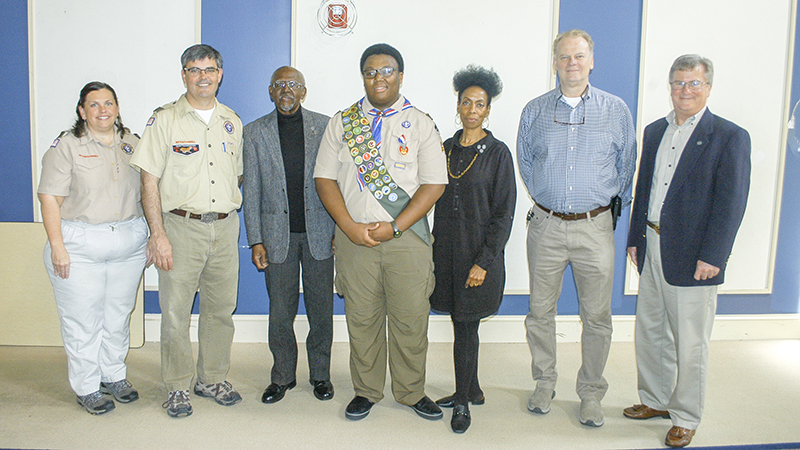 WEST POINT — JahWill Fannings kept the family tradition going last week. He’s the third son of Bill and Theresa Fannings to earn the rank of Eagle Scout and the twelfth member of Troop 9003 to join that prestigious group since 2010. And more Eagles are potentially on the way, with as many as five or six more possible in the next couple of years.

To earn the rank of Eagle, a scout must have an idea that would benefit the community, get permission from the benefactors to do that project, raise the money needed to fund it, get the permits that are needed and have their plan approved by the board.

JahWill’s project was to build a school bus shelter at the corner of Pear and Hatchett streets, not far from the Forest Mill apartments. It’s been getting lots of use, especially on bad weather days. His two older brothers, Earnest and Hoston, had projects for the food garden across from West Point First Baptist Church. Earnest, who’s now a school teacher, built an irrigation system, and Hoston, who’s a junior at Georgia State University, built a compost bin for the garden.

Fannings is a tenth grader at Troup High School.

“They plan their project, organize it, schedule it and get all the needed materials,” said Scoutmaster Joel Finlay. “Volunteers help them with the project, but the scout does everything that’s needed to get them to that point.”

Any boy can get involved in scouting when they reach the sixth grade. It’s a great opportunity to build friendships, do fun things and perhaps earn the rank of Eagle. Troop 9003 will be taking part in upcoming trips to St. Simons Island and to Cloudland Canyon State Park. In June, they will have summer camp at Camp Lumpkin on West Point Lake.