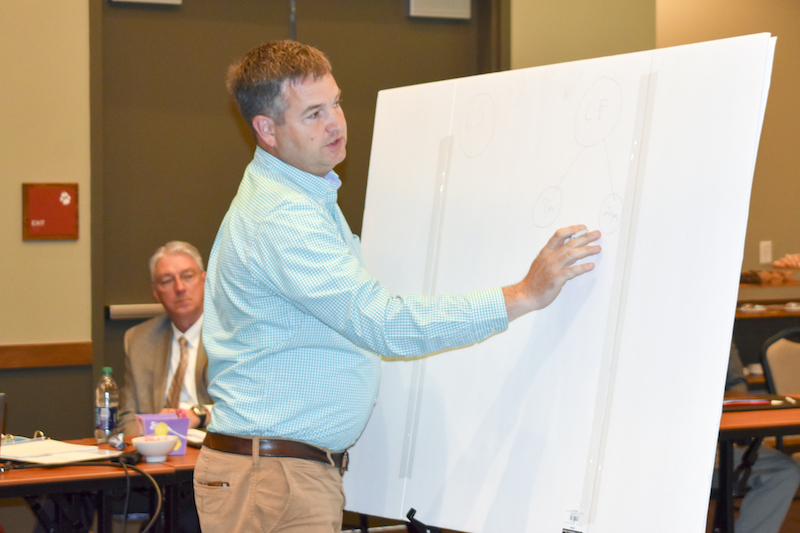 Local businesses that have had trash hauled away by the City of LaGrange for more than a decade will soon be looking for a new hauler, due to a recent decision by the city to exit the commercial trash hauling business.

During its retreat last week, the LaGrange City Council took a close look at buying a new landfill site or building a transfer station to handle trash currently being taken to the quickly-filling landfill. During this discussion, the council ultimately decided to remove the city from the commercial sanitation business, which costs more than it brings in and produces significantly more trash than residential customers.

“The problem is the money that I make at the landfill and on the residential side goes to subsidize commercial [trash hauling], which has been losing,” Public Services Director Dion Senn said. “In return, I have to take money that I make to keep that operation running, and at the same time, I have to run garbage trucks that are dripping juice, that have hydraulic leaks, and that is stuff that I am spreading all over our town because I don’t have the funds to put back into that department that is making money.

“I’m going and picking up these commercial accounts everywhere, but the real people who are paying for that are citizens, and those are the ones that I am not able to provide the level of service that we need to provide.”

In 1996, the City of LaGrange spent $8 million on a new landfill, which caused the city to move into commercial sanitation in order to be able to fund the landfill. Now, that landfill is filling up faster than the city can find a location for another landfill location. Commercial sanitation is now set to be cut within the next six months in order to extend the life of the existing landfill.

“In 1996, we wanted to feed the landfill,” Mayor Jim Thornton said during the discussion. “Now, we want to starve it. … We would more than double its life. Eight years would go to 20 years, and at the same time, we would stop losing money in the commercial sanitation operation.”

The city raised commercial prices on the services last year to save for a new landfill while recovering money lost to commercial trash pickup, and the city has already decreased the number of customers it has outside of a set geographic area.

“Since 2011, we’ve been losing money in commercial sanitation operations, and what [the city council] asked me to do was to go back and make changes in that operation to try to make it profitable,” City Manager Meg Kelsey said. “So, I got with the sanitation team. I spoke with Dion [Senn], and we started basically bringing the operation into our geographic area. We were out in Alabama. We were out in Heard County. We were in Harris County.”

“Basically, residential and the landfill are subsidizing the commercial operation, as we discussed last year,” Kelsey said. “We are still making money in the landfill business.”

Senn explained that residential is profitable because housing density makes it easier to make more pickups.

During the discussion, several council members said that they were uncomfortable with the idea of essentially having residential customers cover the cost of commercial trash pickup.

“If we are losing money, that is a no brainer. We need to come out of commercial sanitation and go with what has been recommended,” Council Member Willie Edmondson said.

“Our residential business that all of us pay on our houses is making money, but we are having to divert that money to offset the loss in commercial,” Thornton said. “If we continue operating residential at the same rate we are operating at now, then Dion would have the money he needs to reinvest in the residential business to get newer trucks, better trucks. We get complaints about trucks dripping oil and things like that. We would have the resources needed to invest in that.”

The LaGrange City Council also instructed city staff to begin looking for a location for a new landfill that can be used once the current landfill is full, and there was brief discussion on options for construction of a transfer station for the city or joint city/county use.

The construction and demolition landfill that is jointly owned by the city and the county should not be impacted by the decision. There was also a brief discussion regarding other provider options that would be available to current commercial customers.