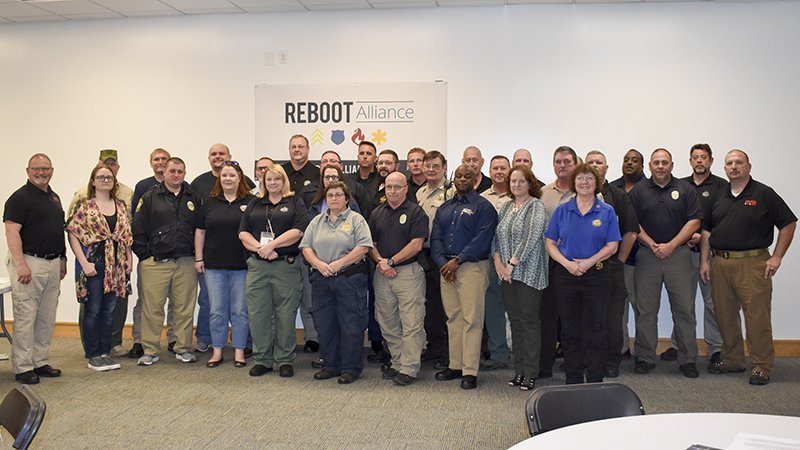 The course is organized through the Reboot Alliance and was sponsored locally by the Troup County Sheriff’s Office and funded with help from churches and businesses in the community.

“We are thankful that Sheriff [James] Woodruff has stepped up to the plate and said, ‘this is important to me,’” said Jason Ritter, who helped lead the course. “The sad thing is one of the biggest statistics is that only 3 to 5 percent of the 18,000 law enforcement agencies in the country have a suicide prevention program or a stress management program that actually reaches out and says, ‘It is OK to hurt. It is OK to have issues.’”

“We’ve had very good input both days,” Ritter said. “There have been amazing responses to the questions and to the triggering things that we do. We to try to engage discussion. Instead of it just being a teaching moment, we want it to be a lot of group discussion, and we have had a lot of that, especially today, on the second day where people are able to share their story, share their experiences, share the trauma that they have been through.”

The course is usually offered as a two-week course, but due to time constraints that many first responders face, this two-day version was also offered. Officers who completed the course received 16 hours of training credit for their participation, and organizers hope that participants will take away ways of dealing with trauma that will help them for years to come.

“One of the biggest things that the general public doesn’t really understand about public safety is we see things, we hear things, we smell things, we touch things that the normal person would normally never have to,” Ritter said. “The worst part about that is you can’t un-touch those things or un-hear or un-smell or un-see some of those things.”

LPD Sgt. Mark Cavender, who attended the class and teaches a course for the LPD that addresses some of the issues covered by the Reboot Alliance class, said that he found the program extremely informative. He said that he particularly enjoyed the course’s focus on religion as a part of overcoming trauma.

“It was definitely a different style of training focusing more on the trauma and stress that comes with public safety work as a whole, but also putting the religious aspect into it,” Cavender said. “It was good. It makes you do a lot of thinking, a lot of self-assessment.”

Cavender said that everyone has a different way of maintaining a balance in their lives, and religion is important to maintaining his own balance.

“You have to learn different ways to balance work, home, religion and everything else,” Cavender said. “To me, religion plays a big part in that equal balance, so that is one reason that I thoroughly enjoyed this class is the religious aspect as well as coming together with 30 or so people in the same profession as yourself and the same field as yourself and realizing that we are all the same.”

Cavender said that it is important that first responders remain aware of the mental and emotional aspects of their jobs because of the way physical, emotional and mental trauma can build up over time.

“It is important to recognize the signs and symptoms of depression, suicide awareness — in law enforcement alone more officers die by suicide every year than any other felonious assault or accidents,” Cavender said. “Those are just the ones who are reported.”

The impact of traumas on first responders outside of work was an important component of the course, which emphasized to participants that they are not alone.

“They are humans,” Ritter said. “They have to leave this job at some point and go home to a family, to a wife or husband and to children, live a normal life, go to little league and go to dance recitals and do all these things that normal people do, but they do it at a heightened awareness all the time because of the trauma that they’ve [experienced].”

Both Firstline Responder Stress and Trauma Healing and Reboot Combat Recovery are regularly offered locally, and anyone interested in taking part in the training or sponsoring it should contact jritter@faithlagrange.com.