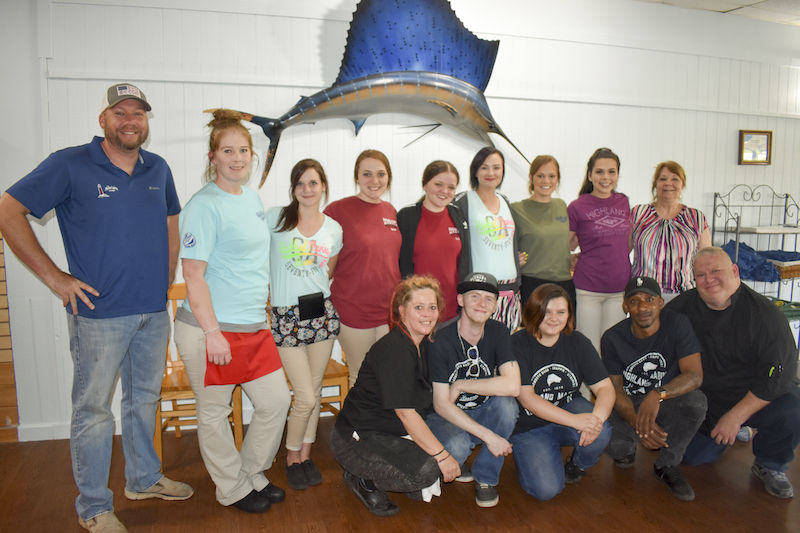 The staff at Highland Marina’s Sunset Grill poses for a photo on opening night. - Alicia B. Hill

The sun was still high over the water when Highland Marina’s Sunset Grill welcomed its first customers into its recently redone dining room, and they began to scan a very different type of menu than the resort has featured in the past.

The restaurant reopened as a year-round operation with a full menu on Friday, and within minutes of opening its doors, customers were already filing in.

“The last several years, they’ve just had a seasonal restaurant with a very limited menu,” said Darrell Jones, the owner of Highland Pines Resort and Marina. “It closed Memorial Day last year. It was usually open from Labor Day to Memorial Day each year and was closed a few days during the week as well. This is the first time in many years that it has been open as a full-blown restaurant from 11 a.m. to 9 p.m. six days a week. We will be closed on Mondays.”

Jones purchased the marina in October and has undertaken a number of renovations since then. However, none were as often-requested as the restaurant.

“[I opened it] to stop telling people we don’t have a restaurant,” Jones said. “One of our number one calls and questions that come in is, ‘Has the restaurant opened?’ Because not only does the restaurant serve our customers here at the marina and the resort and the camp ground, it also serves the local community as well.”

The restaurant now features, steak, chicken, seafood, pizza, wings, sandwiches and salads on its menu, and Jones said to expect regular specials at the restaurant.

“We’ve got seafood. We’ve got burgers. We’ve got steaks,” said Tamara McCoy, the kitchen manager. “We’ve got all kinds of variety. It is going to draw in the crowd.”

Jones already had some favorite items on the menu, which he hopes visitors will enjoy as much as he does.

“I’m a filet and baked potato kind of person, so [I’m partial to] that filet and the sausage and cheese plate,” Jones said. “Every time I go to Memphis, I have that, so whenever I have the option of putting it at a property — those are the first two things that are probably going to be on the menu.”

He said there are also plans to host live music, trivia nights and other special events to encourage people to make the short drive from downtown LaGrange.

“We are within 15 minutes of most everywhere in LaGrange,” Jones said. “Traditionally speaking, these types of businesses that are on the water — much longer roads have to be traveled to get to the audiences, so I think LaGrange is extremely fortunate to have access to the water, right there close to its metropolitan center.”

Highland Marina has other major developments on the horizon, with renovations at its cabins and a boat club starting next week, and Jones said that he looks forward to sharing the updates at the marina and the restaurant with the community.

“We are excited to have them out, have the community coming back out to the property again,” Jones said. “We want feedback and things that they want to see. We want bands to approach us, people who like playing here locally. We want to support those talents and basically just cater to our community and have them come out and be part of everything here with us.”

The Sunset Grill at Highland Marina is located at 1000 Seminole in LaGrange. The restaurant is open Tuesday through Sunday for lunch and dinner. For more information, call (706) 882-3437.