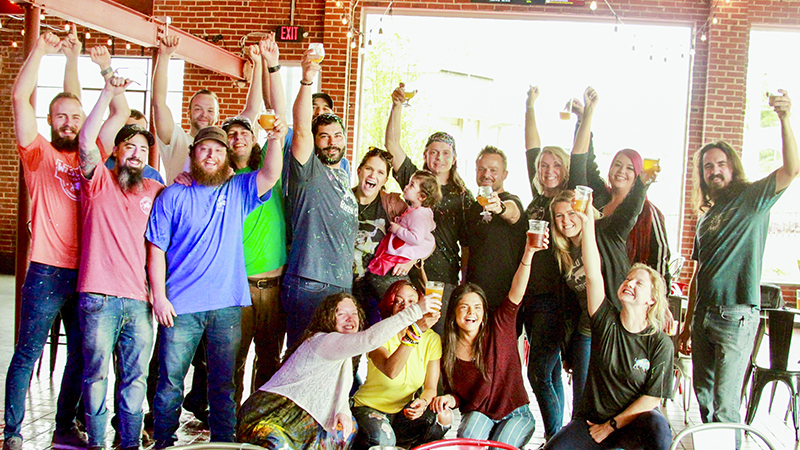 Wild Leap Brew Co. has been named Best New Brewery in the United States, based on a nationwide vote through USA Today’s 10Best Readers’ Choice Awards.

The brewery, which opened in September 2017, was nominated as one of the 10 best breweries in the country by a panel of experts. From there, it was up to voters, who had four weeks to pick their favorites.

Wild Leap was in the top three most of the way, but for the final days of the contest, the results were taken down so that the winner would be a surprise. On Friday, the winner was revealed, and Wild Leap had a watch party for all of its employees.

“We had the entire staff here to watch and when the countdown went down, the webpage stuck, so we had to run over to refresh it,” said Rob Goldstein, co-owner of Wild Leap. “When it showed Wild Leap as the winner, we all went nuts.”

“We just relied on our fans to make it be known,” said co-owner Anthony Rodriguez. “There’s not a lot of strategy in a contest like that. We always posted it on Facebook, but we are just happy we have so much support. That’s really what it’s all about.”

Goldstein said during the contest that in the bigger picture a win for Wild Leap would be a victory for LaGrange as well. On Friday, he said this is proof that LaGrange is a great place to start a company.

“Our approach was to find a city that was as passionate about starting a brewery as we were. Once we found LaGrange and things fell into place, it seemed perfect,” Goldstein said. “It’s a testament that if you want to start and grow a business, this is a great place. I think LaGrange should be in the conversation as one of the best cities in America to move to and start a company.”

Fans could vote for their favorite brewery every 12 hours on the website, and many people set their alarms in order to vote for Wild Leap.

“The passion and enthusiasm, we are humbled by it,” Goldstein said. “We are a little bit in shock that we were able to win this thing, and we want to thank everyone for their support.”