Walk A Mile in Her Shoes event coming 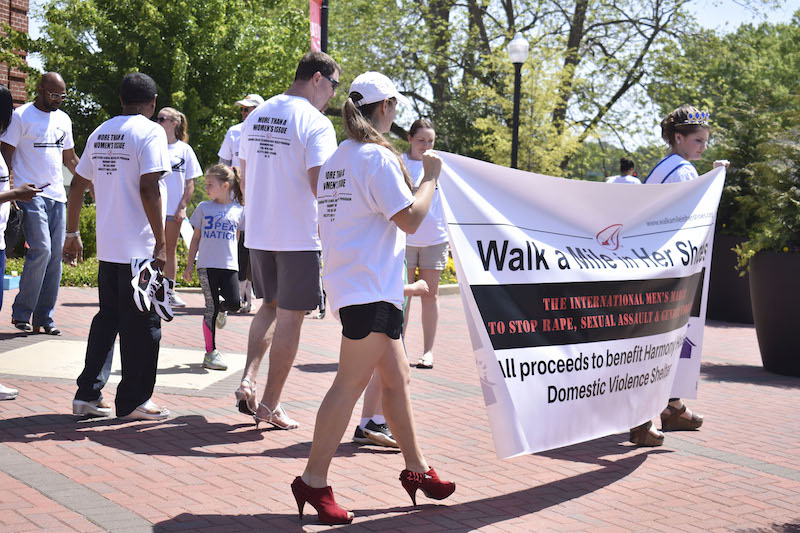 On April 13, local men will march down the street near Granger Park while wearing heels to raise awareness for sexual assault and gender violence at Walk a Mile in Her Shoes. (File Photo)

On April 13, local men will march down the street near Granger Park while wearing heels to raise awareness for sexual assault and gender violence at Walk a Mile in Her Shoes.

The LaGrange walk is part of the larger international men’s march to stop rape, sexual assault and gender violence, and everyone, regardless of gender, is invited to join the march and take advantage of the resources at the event. High heels are not required to participate.

“It is a men’s event where they have the opportunity to walk a mile in her shoes, so we do have high heels that range from a size 10, all the way up to a size 15 for those who want to take on that challenge of walking the event in heels,” said LaKae Ford, community educator for Harmony House Domestic Violence Shelter. “So, having that visibility of people driving by… I think that is a great piece that we can add to it.”

This is the second year that Harmony House and the LaGrange College Clinical Mental Health Program have sponsored the walk, and Ford said that she hoped the higher traffic on the street where this year’s walk will take place.

“I think it allows us to be a little bit bigger and expand a little bit more, which is what we are trying to do year after year anyway,” Ford said. “We really want to make sure we are impacting and reaching out to as many people as we can.”

There will be resources, food trucks, vendors, blood pressure checks and free HIV testing at the event. Many of the resources will center around sexual assault, and Ford emphasized the importance of recognizing the signs of sexual assault in order to be able to support those facing it.

“There was a statistic that one in four women are sexually assaulted within their lifetime, and then you have someone who is sexually assaulted every 98 seconds [in the United States], so it is a big jump,” Ford said. “So, just bringing that awareness piece, where we can discuss those things [is important].”

“It is an international men’s march that is geared toward stopping rape, sexual assault and gender violence, but it allows us to have a conversation with not just men, but men, women and students that we can get to come out to the event to let them know from a prevention standpoint — especially as a student — if you recognize any of these things occurring, you can go get the help,” Ford said. “Working with LaGrange College clinical mental health program and looking at them as a resource, Harmony House Domestic Violence Shelter as a resource. We have nurses that are able to do sexual assault kits as a resource in the community, so I think it’s just us connecting those dots that allow us to have a better conversation and let people know that this is a safe place to talk about it.”

Walk a Mile in Her Shoes will begin at 100 Hunnicutt Place on Saturday, April 13 at 11 a.m. The event is free for students with an ID and $10 for adult walkers. High heels for walkers are available on a first come, first served basis and walkers are encouraged to bring their own if possible.