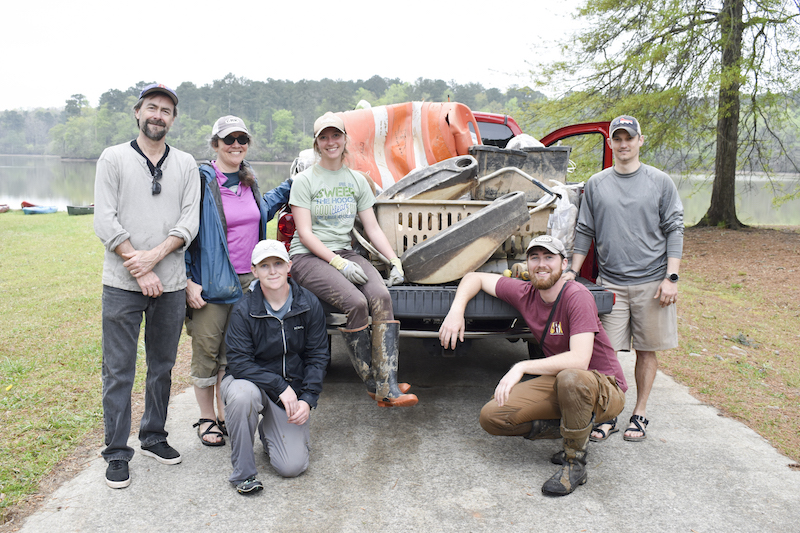 Volunteers from Saturday's Sweep the Hooch cleanup project pose for a photo with trash collected from West Point Lake. - Alicia B. Hill

FRANKLIN — Roughly 1,000 volunteers from throughout the state gathered at 40 sites along the Chattahoochee River and connected bodies of water on Saturday to take part in Sweep the Hooch, an annual cleanup effort.

West Point Lake was included in the cleanup, with volunteers at Moore’s Creek in Lanett, Alabama, and Brush Creek in Franklin. Volunteers said they found soccer balls, basketballs, plastic bottles and plastic cups littering the shores of the lake.

“The majority of this trash came from somewhere upstream, but there is also a reasonable chance some of this trash is coming from local sources,” said CRK Middle Chattahoochee Director Henry Jacobs.

By lunchtime, the volunteers at Brush Creek Park were loading the back of Jacobs’ truck with bags full of trash for the second time, so that it could be taken to the nearest dumpster. However, even after hours of work, there was still more to be done.

“It is satisfying, but still there is tons more that you find around a corner. I’d feel real satisfied about that bank, and then come around the corner and there’d be lots more,” said Alicia Jacobs, one of the volunteers who drove from Atlanta to take part in the clean-up.

The eight Sweep the Hooch volunteers at Brush Creek said that while they found quirky items, like a toy train, a large portion of the trash was made up of bottles.

“The items that I picked up most were water bottles and plastic Gatorade bottles, as far as the sheer number,” said Ryan Chamblee, a local volunteer.

Chamblee said that he enjoys spending time on the lake with his family, and he saw the event as a chance to protect that. He learned about Sweep the Hooch from an event on the Floating classroom. There were eight volunteers at the Brush Creek pickup site, which has been a cleanup location for years, and locals said they appreciated the effort.

“It is amazing,” Heard County Commission Chairman Lee Boone said. “It’s a blessing, and we welcome them here. I just can’t thank the whole organization enough for what they do for the rivers in Georgia, especially this area of ours.”

The volunteers said they hope that the cleanup will raise awareness and that more people will begin to pick up trash they see while visiting the lake and river, because of the role they play in providing fresh water to the area.

“It makes you feel more connected to the water, like you are doing something instead of just turning on the tap and taking it all for granted,” Hal Jacobs said.

The volunteers said that some of the people at the park followed their example and picked up trash in the area as well, and Henry Jacobs said that was part of the event’s goal.

“At an organization like Riverkeeper, we want to help get momentum going to encourage people to help clean up the lake, but ultimately, it is up to the public, the community to take it upon themselves,” Henry Jacobs said. “We want to be there as a resource. We can help organize these cleanups, but the bigger picture, the way it gets solved and the way that you have a clean West Point Lake is for the public, the community to feel like they are invested.”

The next event sponsored by the Chattahoochee Riverkeeper will be the Chattahoochee Valley River Rally on May 4. This year, the 3-mile paddle will begin at 5 p.m. at Hardley Creek Park. Then beginning at 6 p.m., there will be family-friendly festivities at Downtown River Park in West Point.

Keep Troup Beautiful will host the Great American Cleanup on April 27 at Pyne Road Park, which will also involve cleaning up trash near West Point Lake.