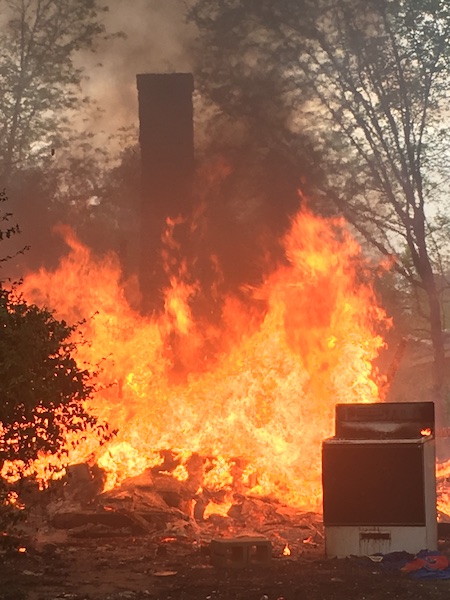 The West Point Police Department performed a controlled burn on a structure located at 1300 East 7th Street in West Point on Tuesday morning. The structure had been deemed unsafe and unfit by the city. -Baker Ellis

On Tuesday morning, the West Point Fire Department performed a controlled burn on a dilapidated structure located at 1300 East 7th Street. The controlled burn started around 8:50 a.m. and lasted for approximately an hour and a half, during which time large puffs of black smoke were visible from around the city.

“We’re trying to clean up some unsafe and unfit structures, some of them we’re able to destroy by fire, others we have to tear down,” West Point Fire Department Chief Milton Smith said on-site.

“This one has been on the unsafe and unfit list for a while, and we were able to make it happen today.”

The property is not owned by the city, per Smith, but the owner of the property had asked for the city’s help in removing the property, after it had been deemed unsafe and unfit.

“In helping to remove the property, the is one of the methods that we’re able to use,” Smith said.

Per the Troup County Board of Assessors website, the property owner is listed as Willie Jean Trammell.

For a property to be deemed unsafe and unfit, there are a litany of legal steps to go through, per Smith, thus the process is not quick.

“It takes some time,” Smith said. “The court and the building inspectors work diligently with all the property owners, trying to say, ‘this is unsafe and unfit, this is why.’ Then the property owners have to go through the process of deciding if they can make the financial investment to make it safe and livable. Some say, ‘no we can’t, can you help us?’”

To be deemed an unsafe and unfit structure, the structure must be deemed dangerous to the lives of anyone who might live there.

“Unsafe means it is unsafe for anybody to have full-time habitation there, while unfit means we don’t want any animals or anything else causing healthcare concerns,” Smith said.

“I’ll give you an example, this one had rooms that didn’t have floors, it had floors that were collapsed. We’ve got some structures that possibly have roof damage and siding damage. They’re in different places on the list.”

Smith also confirmed there are other properties within the West Point city limits that are being considered for the unsafe and unfit list, but no others at this time that have been approved for a controlled burn.