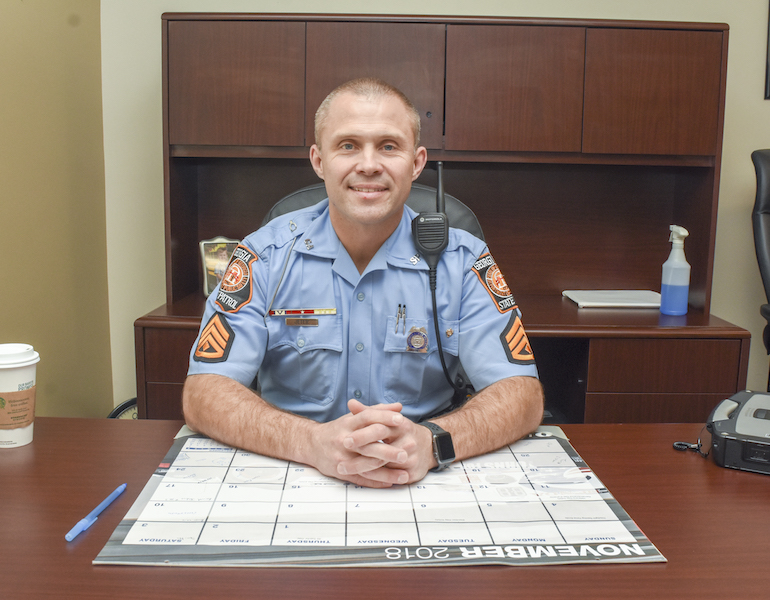 Scott Jeter was named as the new GSP post commander of the local office on April 2, which oversees Troup and Harris County. - Daniel Evans

LaGrange native Scott Jeter is back home and serving as post commander for the local Georgia State Patrol office, which oversees Troup and Harris County.

Jeter was officially promoted to post commander on April 2 and was introduced during Tuesday night’s LaGrange City Council meeting.

“I’ve always dreamed about being the post commander, but you never know how things are going to turn out,” Jeter said. “To become LaGrange’s post commander, I’m just very fortunate.”

Jeter graduated from Hogansville High School in 1993 and has held various roles in GSP over the years. However, throughout his career, he and his wife Kendra have kept their residence in LaGrange.

“I don’t think it’s set in yet,” Jeter said of being named post commander in his home county. “It’s a very good feeling to be back home. I just have always enjoyed helping people and being involved in the community.”

Jeter’s public service journey started when he began volunteering for the Troup County Fire Department, and he worked for TCFD from 1996 to 2001. During his time with the fire department, he recognized he needed additional medical training, thus went to EMT school and worked for American Medical Response for some time as a result. In 2001, he graduated from trooper school and has been with the GSP ever since.

He was assigned to work Villa Rica initially, but ended up spending the majority of his career in LaGrange. In 2015, he was promoted to sergeant and trained future GSP troopers.

Recently, he’d made a lateral move to Villa Rica, leaving his training position.

“I felt like it was time for me to get back in the field,” Jeter said.

Not long after, Jeter was offered the post commander position in LaGrange that was recently left vacant by Maurice Raines, which he accepted. With the promotion, he was able to return to work in the place he was always hoping to return to.

He’s done a little bit of everything with GSP, including serving with the state SWAT team and serving on the criminal interdiction unit. He’s also a driving instructor and firearms instructor.

However, he’s arguably most proud of his work as a peer support member, which allows him to work with other first responders who have been through a traumatic event.

“Any time one of our troopers or another officer or firefighter is exposed to a traumatic event, in the past they had to go see a doctor,” Jeter said. “Now, we have peers that have been trained to talk to another peer. We’ve seen that can help an individual more. They tend to open up more.”

Jeter said his focuses as the new post commander will include focusing on the hands-free law, which still remains fairly new to Georgia after becoming law in 2018. He also said he wants the community to know all troopers are child seat technicians and know how to properly install a car seat.

However, more than anything, he wants troopers to be visible in the community.

“I want us to be active as a post in our community,” Jeter said. “A lot of people think we are just out there writing tickets, but I want the community to know if they have questions or any kind of concerns they can definitely reach out to us.”