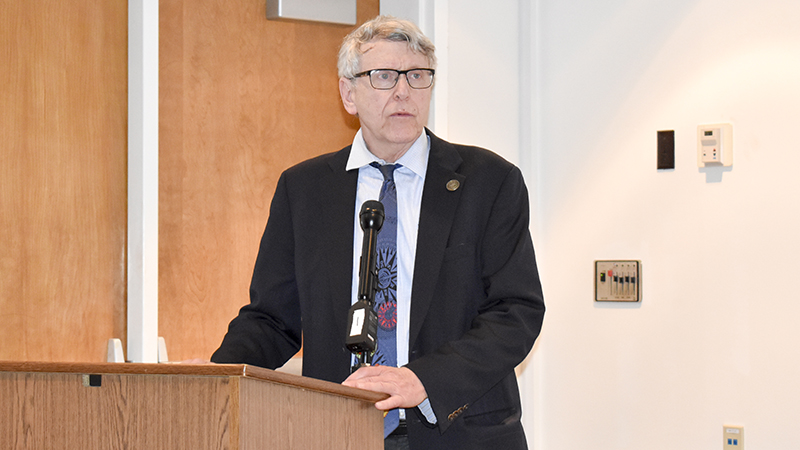 American Friends of Lafayette President Alan Hoffman talks about the Marquis de Lafayette’s farewell tour, which traveled through Georgia in 1825. Hoffman spoke at several locations throughout LaGrange on Thursday. --Alicia B. Hill

On Thursday, Alan Hoffman, the president of the American Friends of Lafayette and translator of the only unabridged version of August Levasseur’s “Lafayette in America 1824-1825,” spoke at several locations in LaGrange.

Hoffman has been following the route of the Marquis de Lafayette’s farewell tour, which took place after the Revolutionary War and inspired the names of many cities, streets and landmarks, including the City of LaGrange, which was named in honor of Lafayette’s home. Hoffman spoke at length about the farewell tour, which he said he hopes will be celebrated on its 200th anniversary in 2025.

“One of the ways [to celebrate Lafayette] is to make a big deal about the bicentennial of the [farewell] tour, and we are trying to raise money and create events in advance of the tour,” Hoffman said. “Depending on how well we do in the fundraising aspect … we could reproduce his routes through the United States and have a Lafayette reenactor go from city to city, from town to town the way he did.”

Hoffman’s talks tied closely into the mission of LaGrange’s Lafayette Society, which has recently begun efforts to educate the community on Lafayette’s impact on the country and, on a more basic level, improving recognition for Lafayette’s statue on the square. Efforts so far have included a display at the LaGrange Art Museum and collaboration with local students at THINC College and Career Academy to create a bilingual book about the Frenchman, but Ingram said those are just the beginning.

“I have spoken with the [Lafayette] Society for the Performing Arts, the LaGrange Art Museum, the Troup County Historical Society and Legacy Museum, plus the Lafayette Alliance,” Ingram said. “We hope to recruit others, and they are agreed in principal that we will work toward the idea of celebrating that bicentennial tour in 2025.”

Ingram said that the programs would likely be as different as the groups sponsoring them, but the theme of Lafayette would run throughout. He said he also hopes to see a play on Lafayette’s life similar to the critically acclaimed performance about Alexander Hamilton.

“The question is often asked, why does Lafayette not have a ‘Hamilton’ [style stage play]?” Ingram asked. “It is an excellent question, and there is no reason that we shouldn’t have that. It simply takes undistracted moments to sit down and think through the story, talent and resources. It can be done. I am convinced that we have the talent in this community.”

“There is no place in the world that can be identified as a Lafayette Interpretive Center — somewhere where you can go and learn [about] Lafayette, the philosophy, the history, the geography,” Ingram said. “Well, LaGrange, our namesake and that magnificent statue will give us a leg up on that, but it takes imagination, creativity and innovation to do something like that. It must be immersive. It must be hands-on.”

Hoffman spoke at THINC College and Career Academy, Hills & Dales Estate and at a press conference at LaGrange College on Thursday.

Palm Sunday weekend marked by plenty to do in…