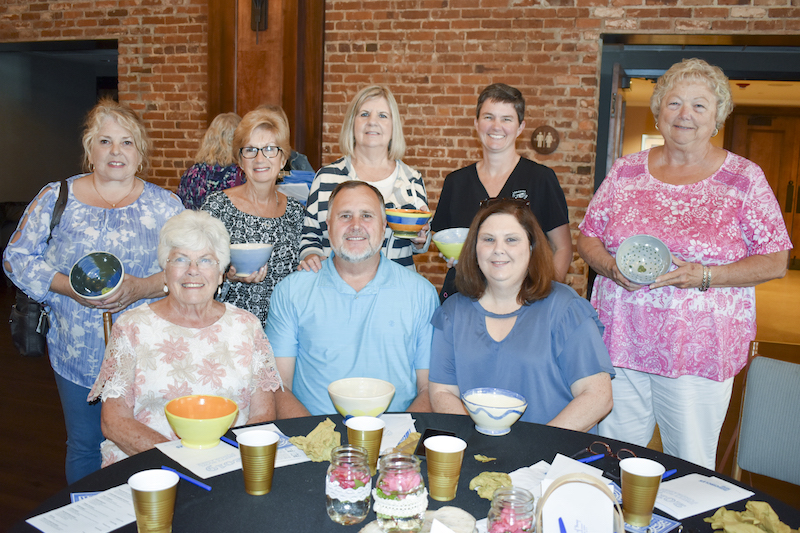 Volunteers arranged handmade bowls before lunch and dinner Thursday in preparation for Circles of Troup County’s biggest fundraiser of the year, the Empty Bowl lunch and dinner. This year, more than 300 people attended Thursday’s event at Del’Avant Event Center. The funds raised by the event are used to support Circles of Troup County’s work with local women, and their families, as they move from poverty to self-sufficiency.

“Circles has allowed me to take a moment and reevaluate my life all together, and I believe my presence in Circles was God ordained,” said Ashon Russell, who participated in the program. “This was an appointed time to be connected to the right people at the right time. I thank God for Circles and the awesome people that are making it a success.”

Russell shared her personal story of how she rose from a fast food worker to a Licensed Practical Nurse, and explained the support she received from Circles and her Circles ally.

“During a break from West Georgia Tech, my grandmother became very ill and was in the hospital for about a month or so. Then my mom was sick in the hospital,” Russell said. “I was frustrated at the fact that I didn’t know how to take care of them, and that is when I decided to go back to school to become a [Certified Nursing Assistant].”

After receiving certification, Russell went on to work at a nursing home and then pursued a degree as a LPN. It was then that she learned about Circles. However, she said that she was hesitant to sign up at first because she wasn’t looking for charity, but the more she learned about the program, the more interested she became.

“I realized that Circles promoted personal growth, financial stability and a better lifestyle for you and your family,” Russell said. “During my journey with Circles, I have learned how to budget and become a better steward of my finances.”

Russell said that the financial lessons that she learned through Circles saved her family from financial hardship when she lost her job just before giving birth to her son and even allowed her to spend time with him at home following his birth. She has since found a job that she said she loves, and she now considers her Circles ally a good friend.

Several Circles of Troup County volunteers also spoke at the event, explaining how their work with the program makes them feel.

“I just really get excited planning the meals because these are very, very special people,” said Kay Duran, a Circles volunteer. “We get excited to be able to provide something that is good for them, and the most important thing is watching those children enjoy the food.”

Duran and her husband, Fred, have prepared meals for about 40 Circles participants once a month for about 4 years.

“We do this because we believe that Circles works,” Duran said. “It is developed based upon proven theory and practices. It is about education. It is about building relationships and helping people to move from poverty to self-sufficiency.”

Food for the program is made possible through Feeding the Valley and support from the Georgia Baptist Convention’s Hunger Funds.

Volunteers from the Junior Service League of LaGrange, LaGrange College Servant Scholars and Circles prepared the meal. JSL also presented a check for $10,262.62 that was raised at Taste of the Town to Circles at the event. The namesake of the Empty Bowl event was created by LaGrange College students under the direction of Austin Wieland.

“Every year, he either makes them himself or stands over students making them, glazes them, fires them,” said Sherri Brown, the director of Circles of Troup County. “It is an incredible process and confuses me and impresses me every time I see it. He has done over 300 bowls every year since he came here.”

Starting in May, Circles will need at least 26 volunteers to serve as allies to program participants in its largest class to date. No specialized background or financial commitment is required of allies.

“Allies don’t have the answers,” Roberts said. “They don’t give money. They don’t tell people how to fix their lives. They are encouragers, friends and supporters.”

Circles of Troup County meets on Thursdays at 5:30 p.m. at 1301 Washington Street in LaGrange. To learn more about Circles or to donate, visit Circlesoftroup.org.