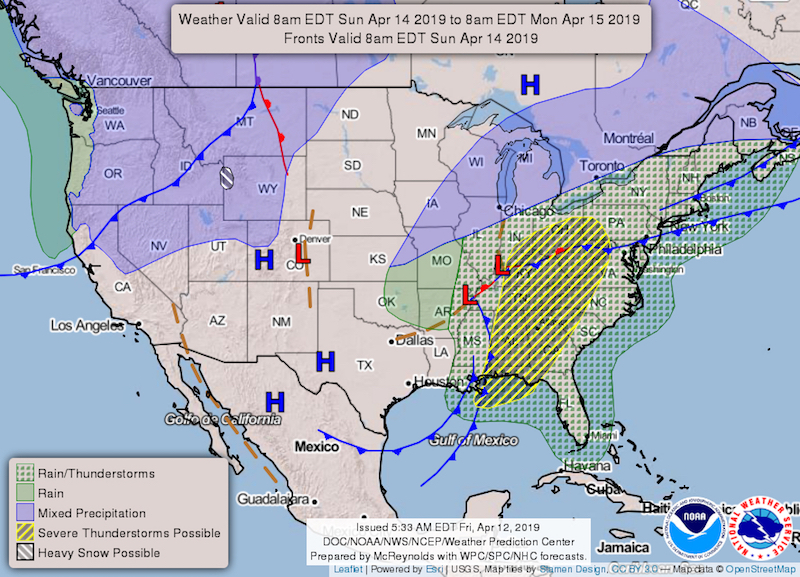 The National Weather Service in Peachtree City is predicting the possibility of severe storms in Troup County on Sunday. - Contributed

Tornadoes and high winds are possible Sunday, when a storm system moves through Alabama and Georgia.

Meteorologist Steven Nelson with the National Weather Service in Peachtree City said Saturday will be a very nice day, but Sunday morning a line of thunderstorms will be moving in. Troup County is listed under an enhanced risk for severe weather on Sunday, meaning several severe storms are possible.

“We aren’t exactly certain what time it will be moving in to the LaGrange area and West Central Georgia, but it could be moving in as early as 7 a.m. or 8 a.m.,” Nelson said. “If it breaks up and dissipates, we could have a second round of thunderstorms in the late afternoon or evening… Any of the storms during that timeframe could be severe. Large hail, damaging winds are likely, and we can’t even rule out a tornado.”

Nelson compared the storm system to one on March 3, which included several tornado warnings in Alabama and Georgia and resulted in extensive damage to Lee County, Alabama.

“It is similar to that system, but hopefully it will be a little weaker than the storm system that brought the tornadoes here on March 3,” Nelson said.

Nelson said it’s important to have a way to get weather information on Sunday.

The LaGrange Daily News will post any weather updates as they are made available over the weekend.