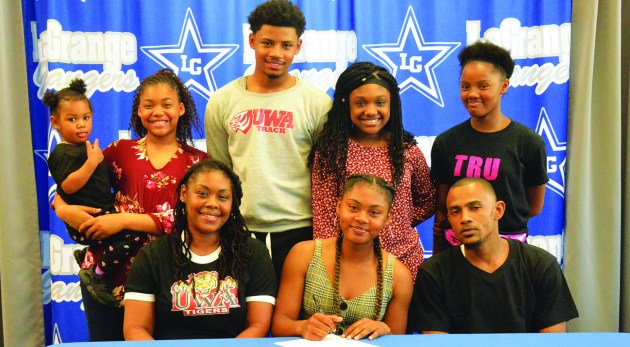 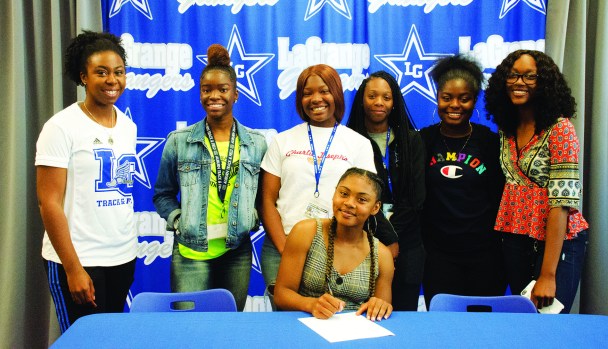 For four seasons, Annaya Chelcy has been sprinting away from the competition as a standout member of the LaGrange High track team.

Chelcy is hoping to do the same thing in college.

Chelcy, a senior who specializes in the sprint events, has signed a letter of intent to join the women’s track and field program at the University of West Alabama.

She’ll be joining a program that is in its infancy, and that’s an exciting prospect for Chelcy.

“I just love the school,” Chelcy said. “It’s a smaller environment, and I like that. The program is really nice, and they’re just starting their track program. So the team right now is just freshmen, so I feel like I have a good opportunity to grow.”

Chelcy has also competed in the 400-meter run as well as the long jump, but the 200 is her specialty, and she holds the school record in that event.

Chelcy has won the 200 in multiple events this season, and she’ll look to finish first in the Region 5-AAAA meet next week at Sandy Creek.

“I’ve always loved track,” Chelcy said. “I started running when I was 8, and when I got to high school it was a totally different environment, and I just loved it.”

LaGrange girls’ coach Tia Sheffield is grateful to have Chelcy on the team, and not just because of her ability to leave other runners in her dust.

“She’s a natural leader,” Sheffield said. “She never conforms to what everybody else is doing. She does her own thing.

“Everybody wants to be popular. She doesn’t worry about that. She just does what she needs to do.”

Like many of her teammates who have also accomplished great things on the track, Sheffield said Chelcy strives to be the best she can be.

“Regardless of if we had a team or not, she would still be out there working out,” Chelcy said. “She is completely driven to do exactly what she needs to do to put herself in the right position.”

Chelcy is one of seven seniors on the team.

Another one of the seniors, Jada Grant, is one of the state’s top long jumpers, and she also excels in the sprint events.

Zakeria Staples and WaWa Benn are both exceptional hurdlers, Renaya Edmondson has had a big season in the discus and the shot put, and Mashya Nunn and Shanteria Kelly are the other seniors.

“One of the main things we talked about is, you’re only as good as your team,” Sheffield said. “They hold you accountable for what you do, and don’t do. That’s what they’ve done as a group. When someone messes up, I don’t even have to say anything. They get it done, and it’s fixed.”

The season has reached the home stretch for Chelcy and her teammates.

The region meet is next Friday at Sandy Creek, and the season concludes with the state sectional and the state finals.

“I feel like we’re going to have a good end of the season,” Chelcy said. “I’m so excited.”