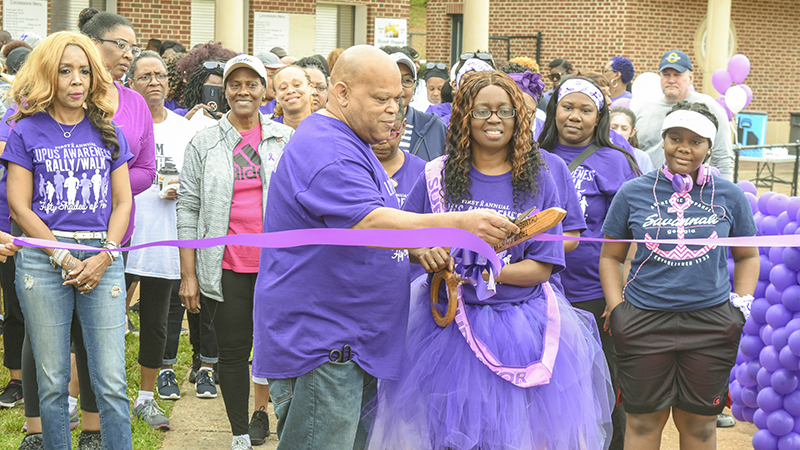 The first-time event was organized by Maria Harris, who was diagnosed with lupus in 2016. Hundreds of people walked four laps around the stadium to raise awareness for the auto-immune disease, which affects 5 million people around the world. The disease affects skin, joints and organs.

“In LaGrange, there’s a lot of people who have lupus, so I wanted to give back,” Harris said. “I wanted to give back to my community. I’d like to set up an account, a nonprofit, where we can start helping survivors. Sometimes they are out of work and have to travel long distances to go to the doctor.”

Harris said lupus nephritis was attacking her kidney, and she had stage four or five kidney failure. She was in a wheelchair and had to use a walker at points, although now she’s able to use just a cane.

Harris said all the steroids she took are now affecting her hip. Since she is a realtor, she was able to work away from the office at chemotherapy treatments and other doctor appointments.

“We just have to be here for each other and let each other know we can make it together,” Harris said.

Before the walk, everyone participating who has survived lupus gathered up front to be honored. City Councilman Mark Mitchell and Melody Wilkerson were among that group.

“I was diagnosed with it a year ago,” Wilkerson said. “I started with the size of a pin hair loss, and it got as big as a quarter.”

Wilkerson said she deals with joint pain and sometimes deals with pain during everyday tasks, such as walking.

“Your body aches quite a lot,” Wilkerson said. “I had heard of lupus, my sister had lupus, but I really didn’t know anything about it.”

“I’m amazed at how many people have come out to support this,” Mitchell said. “It makes you feel good.”

LaGrange Mayor Jim Thornton spoke at the ceremony and a ribbon was cut to signify the start of the walk.

Four-way stop to be installed Tuesday at Wares Cross…