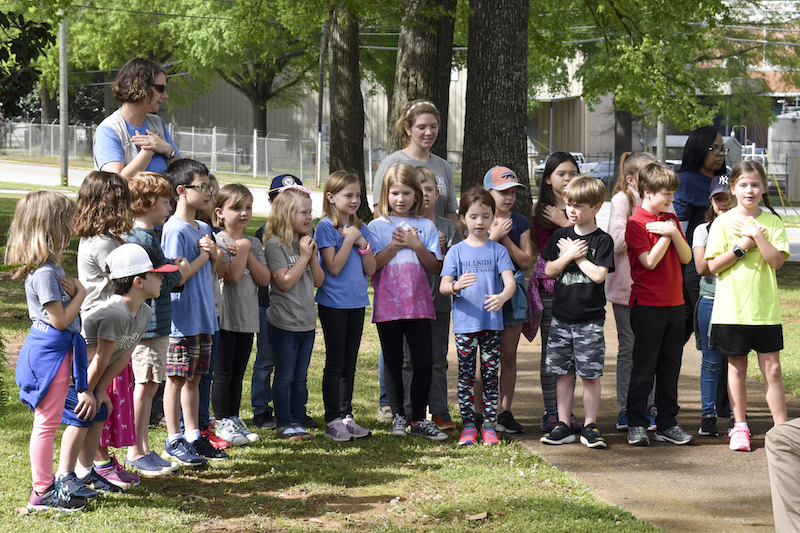 Students from Hillside Montessori sing at the Child Abuse Awareness Ceremony on Wednesday. - Alicia B. Hill

Butterflies flew out over the grounds of Twin Cedar’s Coleman Center on Wednesday morning as local officials concluded the Child Abuse Awareness Ceremony and Re-signing of the Child Abuse Protocol.

Every year since 2008, local groups have gathered to re-affirm their commitment to helping local children by signing the child abuse protocol, which clarifies the role of law enforcement, the district attorney’s office and other groups in helping children facing sexual abuse.

“The protocol is an agreement between all the stakeholders that share participation about how to handle child abuse cases in order to best protect the child, while also giving us the best chance to get justice for that child,” said Herb Cranford, the district attorney for the Coweta Judicial Circuit.

Cranford said that prior to the protocol, efforts were often unnecessarily duplicated, resulting in forcing children to relive traumatizing experiences through telling their stories more times than they needed to. The protocol clarifies the roles of the different stakeholders to prevent that unnecessary duplication while fighting for child victims of sexual abuse.

“Our community is rich with champions for children, and today we celebrate them and the work that they do, while also acknowledging the sad fact that child abuse occurs here and demands action on our part,” said Sheri Cody, the executive director of Twin Cedars Youth and Family Services. “Believe that you can make a difference in the life of a child. We are making a difference. We will continue to make a difference because we are here for the child.”

Wednesday’s ceremony also recognized the toll that hearing about those very experiences can have on members of law enforcement, the district attorney’s office and others offering their help.

“We don’t have any idea, a lot of us, the things these front-line workers and stakeholders have to see every day and endure every day,” Sheriff James Woodruff said. “We would like to think that Troup County wouldn’t have any crime — that we wouldn’t have any crimes against children. But, I am here to recognize our stakeholders and front-line workers because of the job that they do to try to keep these kids safe and are doing the best job that they can do.”

At the state level, several pieces of legislation have been passed in the recent legislative session that Rep. Randy Nix said could further help efforts. Those changes included raising the legal age to get married, the creation of resources that would allow children to report child abuse, increasing funding for school personnel and restoring funding for school nurses.

“Those people are the tip of the spear,” Nix said. “They see the abuse. They are able to get that information back to you. That is part of that team.”

Alan Cook, the director of the University of Georgia School of Law’s Prosecutorial Justice Program, was the keynote speaker at the event. Cook is also a member of the faculty of ChildFirst Georgia. Cook outlined the ways that the law has changed to help prosecutors achieve convictions for sexual assaults against children since he took on his first child sexual assault case as a district attorney in 1989.

“Despite all these positive changes, I think it is fair to say that child molestation is still an immense problem, not only in our state, but nationwide,” Cook said. “We are far from eliminating it from our culture, so if there is a takeaway from my brief words here today, I hope it will be that we have come a long way — certainly since the 1980s — in addressing the scourge of child molestation in our state, but we still have a long way to go.”

Cook said that the groups who re-committed themselves to the Child Abuse Protocol would be part of continuing that process.