Man arrested after fleeing on foot 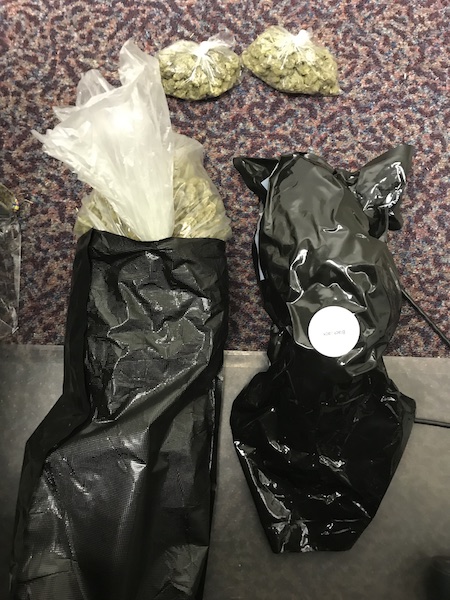 Approximately two pounds of marijuana was recovered from Rodrigos Lindsey Wednesday evening, after Lindsey led a deputy from the Troup County Sheriff's Office on a high speed pursuit and subsequent chase on foot. - Contributed

A man has been arrested and charged with possession of marijuana with intent to distribute, abandonment of dangerous drug in a public place, obstruction of an officer, fleeing/attempting to elude, violence of an instruction permit, failure to maintain lane and driving with an obstructed license plate after a short-lived chase earlier this week.

Per a Troup County Sheriff’s Office press release, a deputy attempted to stop Rodrigos Lindsey, who was driving a 2017 Nissan Sentra on April 17 at approximately 8:49 p.m. ET on Whitesville Road near Lukken Industrial Drive. However, Lindsey fled in the vehicle at high speeds through a residential area before crashing his vehicle into a tree in front of a residence in the 100 block of Royal Court in LaGrange.  The driver then fled on foot, but was captured a short distance later.  Approximately two pounds of marijuana was recovered after Lindsey’s arrest, after he threw it down while running from deputies.

“He ran from the deputy, got out of the vehicle,” Troup County Sheriff’s Office Sgt. Stewart Smith said. “It was not even a long foot pursuit. They got the drugs and took him to jail without further incident.”