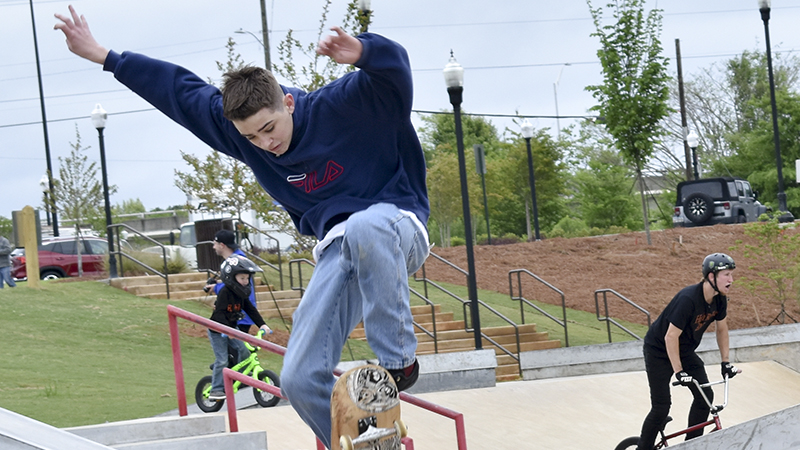 Skateboarders filled Southbend Park on Saturday during the grand opening of the new skatepark. (Alicia B. Hill | Daily News)

When the LaGrange City Council voted to ban skateboarding downtown in April 2016, the city council also soon began discussing a location where skateboarders could safely skate without risking the safety of the boarders or pedestrians.

On Saturday, city leaders and skateboarders from far and wide gathered on the south end of downtown to celebrate the culmination of those efforts with the grand opening of a skatepark at Southbend Park in LaGrange. The skatepark is part of the larger Southbend Park and was funded through a $10,000 grant from the Tony Hawk Foundation, Special Purpose Local Option Sales Tax funds and assistance from the Callaway Foundation. City Planner Leigh Threadgill said that the skatepark was possible because of the city council and city staff’s support throughout the process.

“Once they said, ‘Hey, we think we need a safe place for our skateboarders to call home,’ we went to work,” Threadgill said. “City staff started to engage the local skateboarding community because they are the ones that we are trying to please and provide space for, and nobody knows what they want better than they do.”

“It’s been three years now that this park has been in the making,” Threadgill said. “It has been quite the labor of love that we are celebrating here today.”

“This was definitely a process driven by the community, and we were just there to help bring that vision to life,” Russell said. “We did three different input meetings where we presented different options, and we came up with something that the skaters and riders and all the different users you see — they came up with these ideas.”

The park made use of colors and materials chosen specifically to make it feel like a part of downtown LaGrange.

“We wanted to be able to make a statement — something safe for the kids to be at and really a place to enjoy,” said Jeff Rice, principal with Stantec Action Sports Group.

The skatepark was designed by Stantec Action Sports Group and constructed by New Line Skateparks. In addition to skateboarders, the skatepark is also designed to provide a space for BMX bike riders, inline skaters and scooter riders.