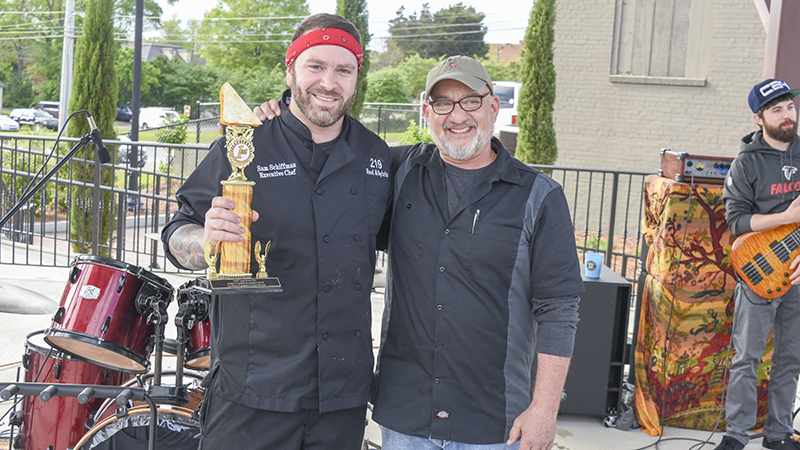 The event featured nearby restaurants, which created a unique grilled cheese recipe, fired up the grill and fed around 1,500 people.

“Our goal is to always try to bring unique events to the city and figure out ways we can have both locals and folks from cities throughout the southeast visit LaGrange and visit Wild Leap,” said Wild Leap Co-Owner Rob Goldstein. “We were really pleased to see so many new faces and so many folks who told us they got a hotel room downtown or drove from a long distance to come here for a day.”

The winners of Saturday’s contest were 219 Food and Spirits from Fortson and Mare Sol in LaGrange. 219 Food and Spirits took home the People’s Choice Award and a Celebrity Judge Honor while Mare Sol won first place in Critic’s Choice. Both 219 and Mare Sol also won last year, although they won opposite awards in 2018.  The Celebrity Judge Honor is a new award.

Each restaurant made a traditional cheese sandwich and a specialty sandwich. Everyone who attended had a chance to cast a vote for their favorite grilled cheese sandwich, and the winner received the people’s choice trophy.

“I based my recipes around that and ran with it to make sure it was three cheeses everybody likes,” White said. “Everything about that about that grilled cheese was local.”

Sam Schiffman, chef at 219 Food and Spirits, said one of his two sandwiches included a Maine Lobster, a brown-lemon butter vinaigrette with smoked provolone and gruyere.  219’s other sandwich included sausage, red peppers and Portobello mushrooms, with a smoked gouda cheese on sour dough bread with avocado oil.

“Everybody loves lobster,” Schiffman said. “It’s great back to back years. We opened up about three years ago and were a newer restaurant trying to get established. This really helps us out.”

Community event goes on despite rain