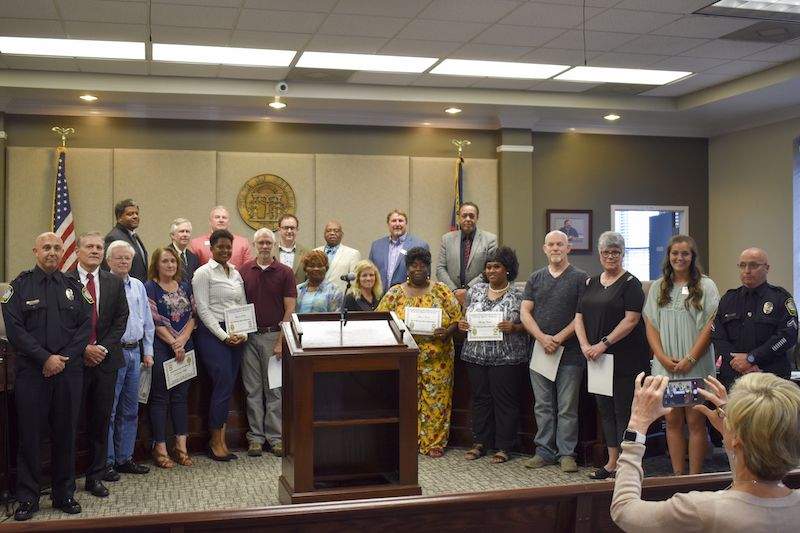 The LaGrange Police Department hosts the free 10-week course to foster understanding between the department and the community while answering common questions and concerns.

“Every year we conduct a citizen’s police academy for the purpose of familiarizing our citizens with some of the various aspects of the law enforcement profession and to demonstrate to participants how our officers are trained, to include how those officers demonstrate our vision of being a community-oriented police department that is truly committed to serving our community,” Lt. Eric Lohr said. “During our 10-week program, they are exposed to a variety of topics in the form of lecture, hands-on and scenario-based training. “

Several of the graduating participants spoke at the graduation, noting their impressions from the course and aspects of LPD operations that they now appreciate following the course.

“We had 18 in this class. I would personally like to see 180, because the more citizens that you can get to come to these classes and learn about the police… we would have a much more educated and better citizenry by knowing what these guys go through,” said Matt Parker, a participant in the citizens police academy.

Chief Lou Dekmar thanked Citizens Police Academy graduates for taking part in the class and learning about how the LPD works.

“Citizenship plays out a lot of different ways, and one of them is learning more about your government,” Dekmar said. “One of the most important aspects of government is public safety, and police were never expected or created for the purpose of being the sole [entity] responsible for public safety. It was always supposed to be a community responsibility. This is just an example of another step for our community that wants to be more engaged.”

“Along with these lectures, they were able to participate in a variety of scenario-based training events,” Lohr said. “First, attendees completed traffic stop scenario training where they were placed in the role of police officers and conducted a variety of traffic stops where they were expected to follow agency protocol. The majority of these were done in low light conditions, so that the attendees had an appreciation for the potential risk involved in every traffic stop.”

Additionally, participants were able to use the judgmental pistol simulator at West Georgia Technical College, and they took part in “shoot-don’t-shoot” practice scenarios, where they were tasked with making split second decisions about whether to use deadly force in the form of simulation rounds.

However, Lohr said that the participants were not the only ones to get something out of the class.

“This graduating class is a very diverse group, which lead to very interesting, educational discussions,” Lohr said. “Officer [Jim] Davison and I had a great time working with these folks, and we want to thank them for making the last 10-weeks enjoyable and educational for us, as well as entertaining.”

The LPD’s next Citizens Police Academy will begin in September 2019. Anyone interested in taking part should contact Senior Police Officer Jim Davison by email at jdavison@lagrangega.org or by phone at (706) 883-2644.