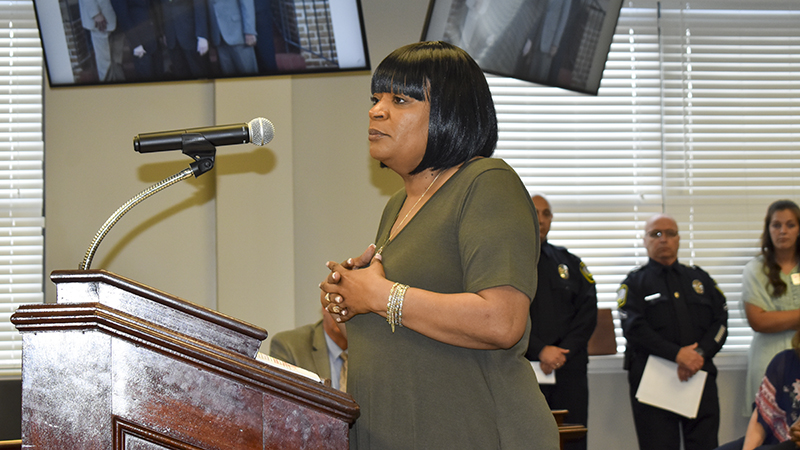 On Tuesday, Yvonne Lopez, the chief executive officer of Ark Refuge Ministries, Inc. updated the LaGrange City Council on the nonprofit’s activity in the last year. - Alicia B. Hill

On Tuesday, Yvonne Lopez, the chief executive officer of Ark Refuge Ministries, Inc. updated the LaGrange City Council on the nonprofit’s activity in the last year, which included the addition of counseling sessions, local partnerships and a 22 percent increase in graduation rate from the program.

“Between 2018 and 2019, we’ve served over 500 men in the Ark Refuge ministries,” Lopez said. “Right now, we have over 60 men that are living in the facility, and the guys have a host of different skill sets that we can use for them to get different employment.”

Lopez said Ark Refuge is partnering with local temporary agencies to help the men in the program find temporary work, which sometimes leads to full time jobs with major companies. She said that some of the men have also decided to go back to school to receive specialized education to improve their future job opportunities and their lives moving forward.

“They pretty much just made some bad choices in their lives that make them end up in a situation where they come to us,” Lopez said. “We thank God that we are here to have our doors open to give people a second chance. If not for the grace of God, some of us would be in the same situation, so that is why this is such a blessing to be able to help these guys.”

Ark Refuge offers the men in its program a place to stay, food to eat and assistance in working through the problems that led to homelessness. It also offers a structured schedule for participants, and it is a regulated and monitored alcohol and drug rehab facility as well. Additionally, Ark Refuge recently became a site for Narcotics Anonymous meetings, which meet some court-ordered requirements.

“We have one of the biggest meetings in the county because we started out with over 60 men,” Lopez said. “It is open to the public, and anybody can come in. I worked with Judge [Michael] Key, and he has put it on the drug court approved Narcotics Anonymous meeting sites for their people to come in, and we sign for people attending. I am really excited about that because once we started that, I started seeing the guys doing more work and digging deeper.

Lopez said that drug and alcohol use are often the symptom of other problems, but between Narcotics Anonymous and trauma therapy, she said that she has seen men be able to address the root problems.

Several of the program’s participants spoke at the meeting, explaining the impact that Ark Refuge has had on their lives.

Ark received $20,000 in funds from the city during the current fiscal year, and the city council will review what support if any the city should provide to the organization during upcoming budget meetings. However, the organization did receive a strong recommendation from LaGrange Police Chief Lou Dekmar.

“Seventy percent of the folks that are in prison are substance abuse related,” Dekmar said. “The biggest challenge for us as it relates to recidivism is prison re-entry, and the Ark addresses both of those in a very important way.”

Dekmar also recognized Ark Refuge for its work in the Calumet community.

Council Member Nathan Gaskin also thanked Lopez for the work that Ark Refuge does in the community.

“I just want to thank you for what you do for the men,” Gaskin said. “You are right, it is hard to find somebody to help a man who is down on his luck, and I appreciate everything you and your husband — God rest his soul — have done for this community.”