Sons of Lafayette to perform spring concert on Sunday 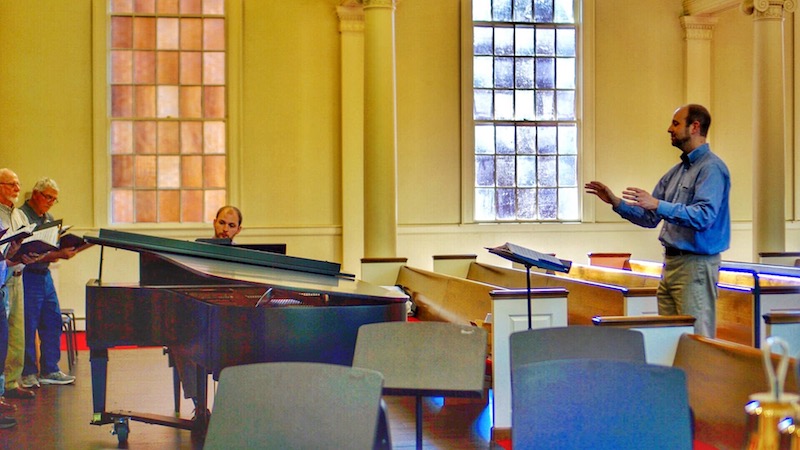 The Sons of Lafayette will perform at the First United Methodist Church on Sunday. - Contributed

On Sunday, there will be “Music in the Air” at First United Methodist Church, as the Sons of Lafayette perform a selection of songs from a variety of genres.

“The title song is actually a spiritual called ‘Music in the Air,’ and we are singing that. It is this big, driving piece that has this incredible piano accompaniment that I don’t know how Andrew [Harry] plays it,” Artistic Director Darian Krimm said. “It was just this really, really moving piece, and what I wanted to do was program a concert that was a mixed bag of pieces that represented different styles, different types of music. It has sacred, secular, spiritual, folk and Broadway. It really has a bit of something for everybody.”

Andrew Harry will accompany the Sons of Lafayette on the piano, and other musicians will join the group for the performance, which will embrace the budding spring.

“I think it is a very fitting theme for spring,” said Don McWhorter, the president of the Sons of Lafayette’s board of executive officers. “It is a spring-ish feel.”

The concert will also feature several solos and a piece composed in memory of one of the members of the Sons of Lafayette, performed for the first time by an all-male choral group.

“We are actually going to be singing a piece that was commissioned and written for one of our former members. It was written in his memory,” Krimm said. “We are looking forward to singing it for our first time. First Methodist actually commissioned it along with the person’s family, but the gentleman that passed away sang in the Sons of Lafayette for a very, very long time. So, we have that same piece of music now set for men’s voices.”

Even with the airy, spring theme, several songs at the Sons of Lafayette concert will be emotionally charged.

“A couple of the songs, I don’t know if I’ll make it through them, because they are very emotionally engaging,” McWhorter said.

Krimm attributed this emotion to the sound that comes from an all-male choral group.

“Men’s voices just have that rich quality that mixed ensembles or other ensembles just don’t have,” Krimm said. “It is such a unique sound, and when you put it together sometimes with those powerful songs or songs that have a really heartfelt message to them… you really have a great strength of message. They are powerful. It is great to stand in front of that sound.”

According to Krimm, the Sons of Lafayette is also excited to feature several new voices in the spring concert, and the group aimed to make the concert as family friendly as possible, lasting just over an hour.

“We’d really love for the community to come and enjoy this, we think it is something that they would enjoy,” McWhorter said. “It will be an experience for the whole family, maybe an opportunity for a new experience.”