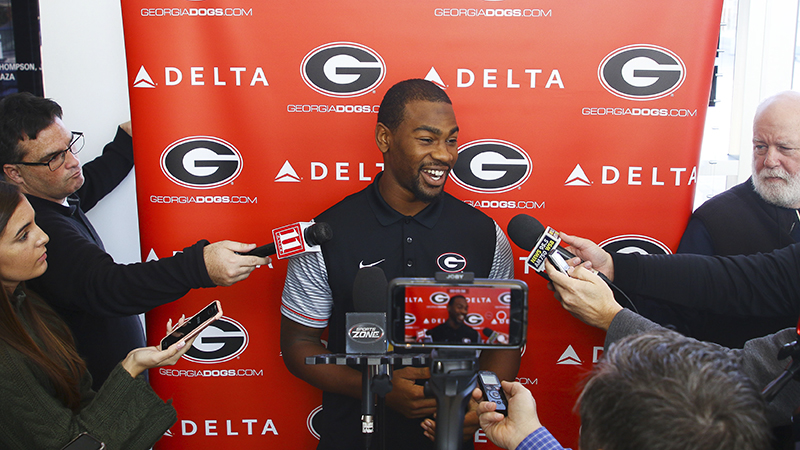 Georgia wide reciever Terry Godwin (5) speaks to members of the media at a press conference in Butts-Mehre Heritage Hall in Athens, Ga., on Monday, Nov. 19, 2018. (Photo by Kristin M. Bradshaw)

Terry Godwin has succeeded on every level.

In high school, Godwin was one of the state’s best and most electrifying players while helping the Callaway Cavaliers win a bunch of ballgames.

After making the transition to college, Godwin continued to get it done, and he was an elite wide receiver for the Georgia Bulldogs for four seasons.

Now, Godwin will get the opportunity to show what he can do on the highest level.

Godwin was selected in the seventh round of the NFL draft by the Carolina Panthers, and he’ll get a chance to earn a spot on the team’s 53-man roster.

When asked what being drafted meant to him, Godwin called it “one of the best moments of my life.”

The Panthers are getting a player who was a four-year starter in the Southeastern Conference.

Godwin finished his college career with 133 catches for 1,788 yards and 11 touchdowns, and he made one of the most memorable plays in recent Georgia history.

During the 2017 season that ended with a loss to Alabama in the national-championship game, Godwin made a remarkable one-handed catch in the end zone in a 20-19 road win over Notre Dame.

During his freshman season, Godwin played in all 13 games with nine starts, and he had 35 catches for 379 yards with two touchdowns.

Godwin was named the MVP of the TaxSlayer Bowl after he threw a touchdown pass and had a touchdown catch.

Godwin was second on the Bulldogs with 38 catches for 397 yards as a sophomore, and his lone touchdown that year came when he returned an onside kick for a score.

Godwin’s junior season was his best.

For a team that was a few plays away from winning a national championship, Godwin had 38 catches for 639 yards with six touchdowns as a junior.

Godwin was slowed by injuries during his senior season, but he still caught 22 passes with three touchdowns.

In one of Georgia’s biggest wins, Godwin had a 24-yard touchdown catch against Florida.

In high school, Godwin was a three-sport standout, and he enjoyed tremendous individual and team success in football, basketball and baseball.

As a junior, Godwin helped the football and basketball teams reach the state semifinals, and the baseball team made it to the state quarterfinals.