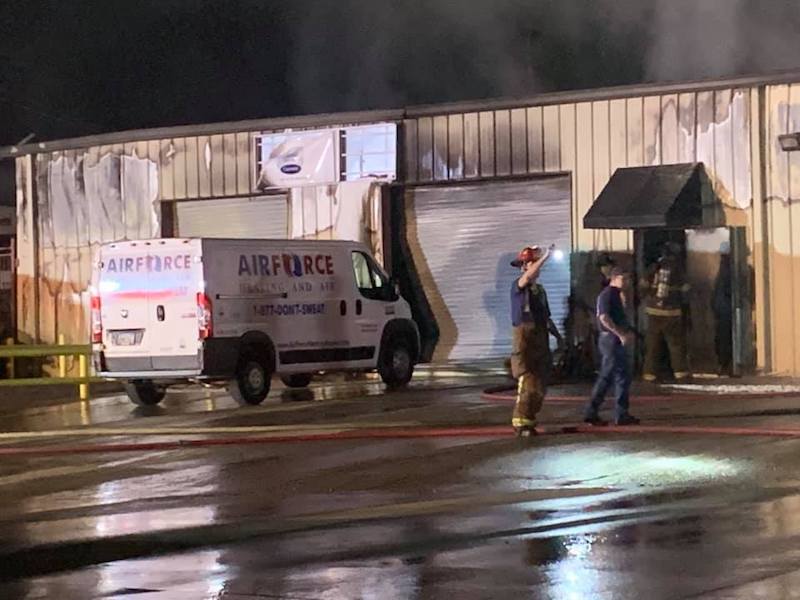 By Alicia B. Hill and Daniel Evans

No injuries were reported. However, the fire was already visible from outside the building by the time emergency services were notified.

“When the first unit got on the scene, they had flames visible through the roof,” Knight said. “Troup County Fire Department and LaGrange Fire Department responded, and together we had about 27 firefighters on scene.”

According to Knight, the fire was discovered when people in the area reported seeing smoke and a deputy from the Troup County Sheriff’s Office went to investigate.

According to the Airforce Heating & Air Facebook page, the fire “devastated our entire infrastructure. It has been declared a total loss.”

Owner Dan Blalock said he was called around 4 a.m. Tuesday morning about the fire.

“From one end to the other, everything is 100 percent loss,” Blalock said.

Blalock said there was probably equipment for seven or eight jobs that burned in the fire, but they were able to replace it quickly and get to work on Tuesday.

“We’ve been catching calls. We aren’t going to miss any business,” Blalock said. “The community has been good to us. We’ve got a little hardship, but we’ve still got trucks rolling down the road.”

Blalock said new computers are already being set up and all of their servers were backed up around midnight Tuesday morning, so nothing was lost. He said the biggest loss was a tricycle his granddaughter loved to ride around the building.

“She’s been riding it for four years and was riding it yesterday,” he said. “That’s the most devastating thing.”

Airforce is set to mark its 19th year in business in LaGrange next year. Blalock said the company is in the midst of establishing a temporary location to work form. Blalock said they might mark 20 years by opening a new building.

Knight said that the cause of the fire has not yet been determined.