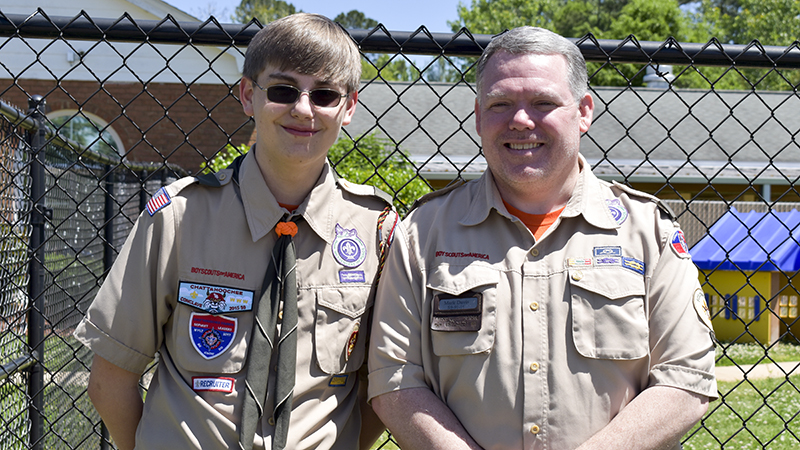 Chase Davis and his father and troop leader, Mark Davis, pose for a picture at the LaGrange-Troup County Humane Society. (Alicia B. Hill | Daily News)

Chase gathered with scouts from Troop 518, Girls’ Troop 31, Pack 518 and volunteers Saturday to build beds for the dogs at the shelter and raise awareness for the need for volunteers at the LaGrange-Troup County Humane Society.

“We are doing the 50 pet beds, but then we are also doing the donation box,” Chase said. “Every time a pet is adopted, they’ll get to take their bed with them. One of the steps of my project is, we are teaching the humane society workers how to build them. That way they can keep the kennel supplied, and also as dogs are adopted, they’ll get to take the bed. That way they will have something with them as they progress.”

Chase said the beds aren’t just a way to provide comfort to the dogs though, since sleeping on hard floors — like the concrete floors at the shelter — can impact a dog’s joint health over time.

“I had to do a research project for school, and one of the things I talked about was, right now the dogs are laying on concrete,” Chase said. “That is really bad for their joints. It actually leads to arthritis. You don’t really think about dogs getting that because it is always talked about in a human context, but laying on the concrete — even if there is a blanket down — is really bad for them. It really hurts their joints.”

He said that the beds relieve that concern and will benefit the dogs for years.

“By elevating them with these pet beds — it is about a 4-inch elevation —it is really going to keep them off of the ground, and it is going to give them some support and help to prevent arthritis and other joint issues that can occur,” Chase said. “Plus, with the mesh cover, if they do end up having an accident, it will just go through, and it makes it easier for the owners because they will be able to hose it down rather than having to unscrew it and wash the fabric.”

For Chase, the beds are about more than just comfort though.

“For the summer, it gets so hot here,” said Jolene Davis, Chase’s mother. “With them being up off the ground, the air can circulate up under [the bed] and keep them cool, so they are not overheating. They are not getting too hot, and then in the winter, they can always put a blanket or towel or something [over it] to keep that heat in and keep it from going through.”

It also hits home for Chase, who was adopted at a young age. The beds are a way to give dogs arriving in a new home something that is theirs to bring with them.

“When [Chase] came to us, when he was adopted, he didn’t have anything,” Jolene said. “He had the clothes on his back, and that was it, and so when these dogs are adopted, they will take their beds with them and have something familiar when they are in new surroundings.”

Jolene and Mark Davis, Chase’s father and troop leader, said that they are proud of what the 16-year-old high school senior has accomplished as a Boy Scout. Right after starting Boy Scouts, Chase helped raise half a million dollars for Boy Scouts by speaking at events. Now, he plans to continue serving as a mentor to younger scouts after receiving his Eagle Scout rank.

“Chase actually helped start our troop,” Mark said. “He was one of our very first scouts, so he has been in scouting since second grade, and I am very proud. Not only is he my son, but he is a leader for our troop. He’s our senior patrol leader, and I am just proud that they are helping the community and supporting local nonprofits around LaGrange.”

Chase is in National Honor Society and Beta Club.

“Not many people know that you can come and volunteer at the humane society,” Chase said. “So, I would really like to see some more community involvement, and for this to be almost like the food bank, where a lot of people go and help out because these animals need as much help as humans do.”

The project received support from Home Depot, JoAnn Fabrics and the Ekkebus Charitable Foundation, and participants received a patch to commemorate the project.

“We want to try to get as much publicity to the humane society [as possible], that way more people will come back and volunteer,” Chase said. “It is really a great organization, and it has helped us out a lot.”

Troop 518 is out of Loyd Presbyterian Church. Girls’ Troop 31 and Cub Pack 518 are also out of the church. Chase is also expected to speak at the Distinguished Citizens Award Dinner in June.