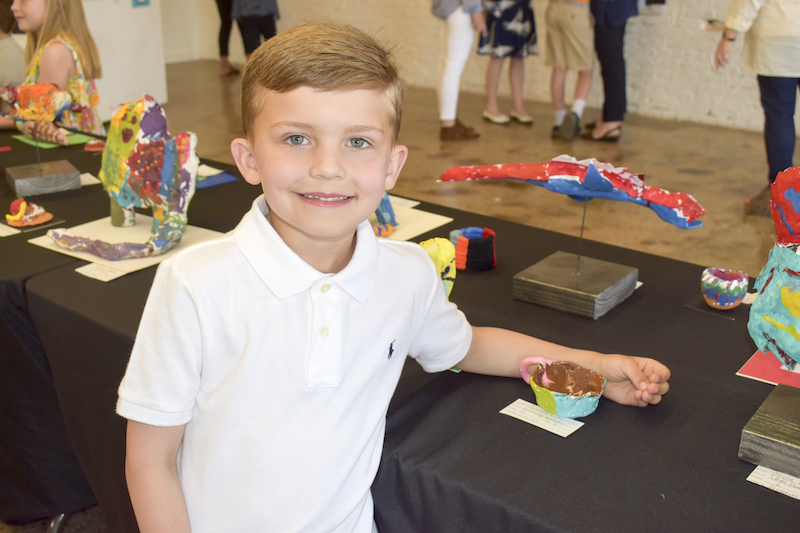 Hatcher Ricks, a kindergarten student at LaGrange Academy, poses with his ceramic entry. - Alicia B. Hill

Parents, teachers and students filled the galleries, walkways and class space at the LaGrange Art Museum on Sunday during the opening of the Creative Youth Art League show.

Keith said that she sees the annual art show have a positive impact on students’ self-esteem and pride in their work, which she attributes to seeing their work in a real museum. She said that students aren’t the only ones getting something out of the show, however.

“This is our favorite exhibition of the year,” said Laura Jennings, the executive director of LAM. “It only lasts a week, but we have 400 artists participating. This is the 26th year of the Creative Youth Art League, and I just can’t say enough about the teachers and the parents who support their kids and their creativity.”

Among the awards presented at the show, Kylee Cole from Harris County High School was the recipient of The Morrill Hutchinson Award, and Kaiden Jackson from Callaway Elementary won the Wates Keller award.

The Morrill Hutchinson Award is named in honor of the late Morill Hutchinson, a founding member and board chairwoman of the Chattahoochee Valley Art Museum, which later became the LaGrange Art Museum.

“Mom passed in October of 2016, and she was classically trained in the arts and always very strongly felt that the arts should be part of the school systems as far as education,” said Bill Hutchinson, one of her sons. “She was very active in this organization.”

“She started this youth program because she wanted to make sure that the artwork of the children is recognized through the schools all the way through high school,” said Chuck Hutchinson, one of her sons. “We’ve carried on the tradition since she passed and want to see it keep going.”

Hutchinson brothers said that their mother would be excited to see the quality of the student artwork at the show. Part of the reason for the quality might be due to the art show’s lasting impact on its participants.

“This is one of the coolest things for me to be able to help with, because I remember as a child Mrs. Keith entering my artwork from — I think third grade — in the Kiwanis Art Show,” said Victoria Slagle, education assistant at LAM and local artist. “That is actually the main reason that I kept going with art throughout my educational career, so for us to have the opportunity to provide the opportunity to these students to see their hard work hanging in a museum space, it brings me so much joy.”

Slagle said that based on the art in the Creative Youth Art League Show, LaGrange’s future artists will create work that is “very beautiful and very colorful.”

The Creative Youth Art League show is free to the public, although donations to LAM are encouraged. The show closes on May 4.

*** The name of an award recipient has been corrected.

Weekend highlighted by bevy of events