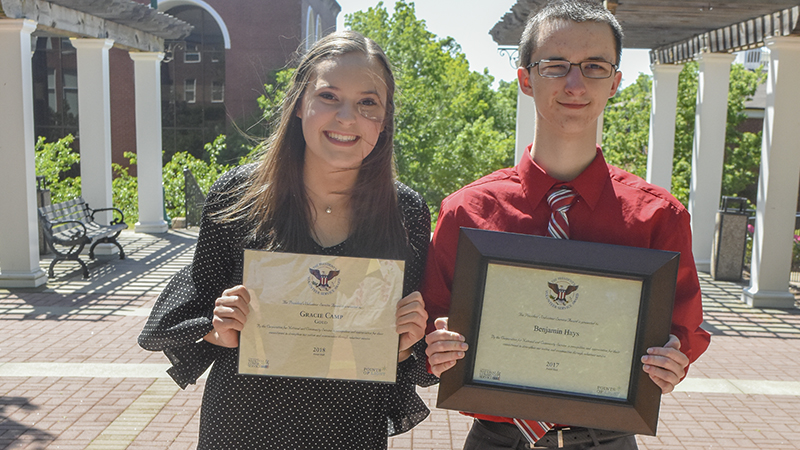 Two homeschool students from LaGrange have received a special honor from the president over the last two years.

Benjamin Hays and Gracie Camp have each received the President’s Volunteer Service Award, which recognizes residents who have achieved a certain number of service hours over a 12-month time period. Camp received it this year, while Hays, a current LaGrange College student, received it last year. The awards are signed by President Donald Trump and the gold award — which each student received — requires more than 250 hours of community service.

Camp received the award after teaching fourth grade math in Zambia and English to students in Guatemala. Now, she plans to major in education.

“It’s actually through a lot of this extra stuff that I’ve done — teaching in the schools — that has given me a passion for children,” Camp said.

Hays said he completed more than 1,000 volunteer hours during high school. Most of them came at Olive Plants Co-Op and at May Martial Arts.

“At Olive Plants, I started out doing a lot of manual labor, moving tables around, setting up classrooms for the day, taking care of needs that people had,” Hays said. “Then, as I got older and more mature and moved up the ladder, I became an assistant instructor in English class.”

Hays has overcome numerous medical ailments while in high school, but he said he is glad he’s worked through them to have a positive influence on the local community.

“It made me think about how I have been able to affect my community positively while doing the duties that God has called me to do,” Hays said.

Camp said she realizes this is an award that not many people receive, so that makes it special.

“I am a follower of Jesus and I know the Lord calls us to minister to people, love on people and to care for people in need and people that just need to be loved on,” Camp said. “It’s exciting to get this award, but it’s also exciting to be able to know I’m making a difference in people’s lives I’m coming into contact with.”