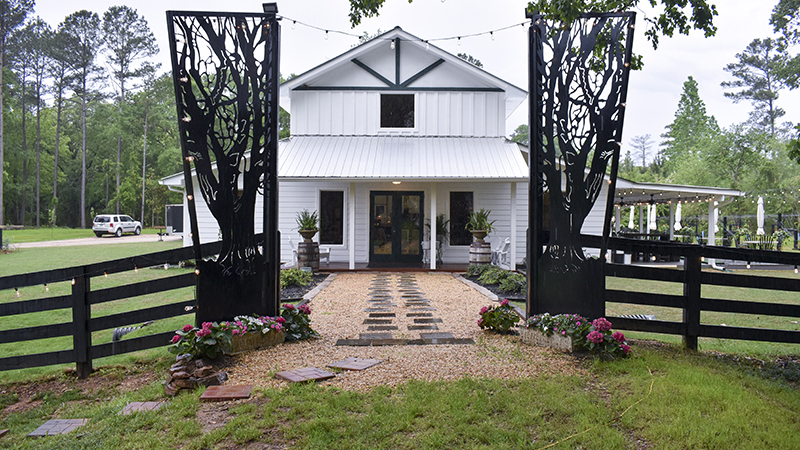 Over the last few months, Neil and Trish Liechty have been overseeing renovations, coaxing grape vines and installing outdoor games at Nutwood Plantation in preparation for the winery’s first days open to the public. Now, after a series of soft-opening events, they are ready to share the only commercial wines bottled within the LaGrange city limits and the property’s family-oriented space with the community.

“We have sweet wines. We’ve got merlots. We’ve got chardonnays. We’ve got a couple of signature wines that we are working with,” Neil Liechty said. “One chardonnay we are doing with the pecans from the trees. We are soaking the wine in the pecans. It is called a pecan chardonnay, and it is going to be hopefully our feature wine. It has turned out really good so far.”

The roughly 200-year-old pecan trees on the property near the home inspired the name of both the home and the winery. According to Liechty, the winery hopes to move from the seven wine varieties that are already bottled to 12 varieties by mid-June. Some of those varieties will include Magnolia Peach, Plantation Peach-shine, a raspberry chardonnay, a raspberry zinfandel, a green apple Riesling and a blackberry merlot.

“We are trying to get fruit with the wines for just a little different flare,” Neil Liechty said. “Most of it is still grapes, but if you add enough fruit to it, then you can smell the fruit. It is good.”

While the Liechtys have discussed plans to sell the wine with a major resort, the couple is cautious about growing too much or too quickly, and they said Nutwood Plantation Winery probably won’t show up on the shelves of major retailers anytime soon. Instead, they hope to focus on developing quality wine and a good atmosphere at the winery.

“We’re not trying to see how big we can become,” Neil Liechty said. “We want quality and want people to have a good time. We’ve got a lot of games out here for them. [We also have] good cheese and good ice cream.”

Neil Liechty said he hopes to see plenty of drop-in visitors at the winery, the same way the couple regularly sees visitors at their home in the Nutwood Plantation mansion, which was built in 1833.

“Just come out, if you are in the area, and we’ll give you a tour and give you a tasting and see for yourself,” Neil Liechty said. “See what your preference is, and we’ll go from there. We’re going to be very family-oriented, as you can see. There are a lot of games out here. We are going to have the ice cream parlor, and we’ve got the cheese room.”

The couple also hopes to use the property to host a variety of community fundraisers and events throughout the year, and they encourage local groups to contact them with requests and ideas.

For more information or to schedule an event, call (706) 881-7401 or visit Nutwoodplantationwinery.com.