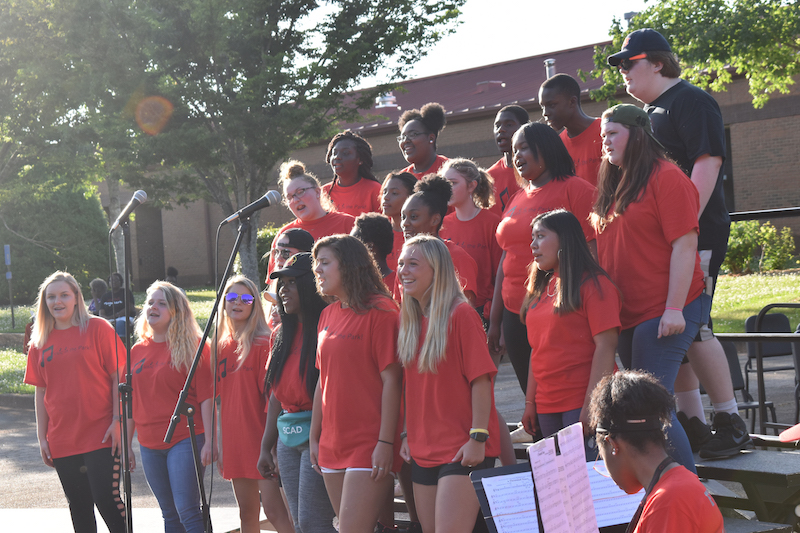 The parking lot in front of Callaway High School transformed Thursday evening into a concert hall and game center, as the Callaway zone music departments held the first Concert in the Park(ing Lot) in an effort to encourage middle and elementary school students to become involved with the school’s art programs. Food, drinks and a plethora of gaming options, including a mobile video game truck, provided for a unique event.

“This is the first time we’ve done this,” Callaway High School Principal Jonathan Laney said at the event. “Adam Wamsley, our band and chorus director, has been wanting to increase the cooperation between the high school and middle and elementary schools to gain momentum toward the high school program and increase participation in the fine arts. [We want to] get the kids thinking, ‘oh, I want to be a part of this.’”

Elementary, middle and high school students participated in the event, with the Hogansville Elementary Recorder Ensemble performing a rendition of “Rollin’ to Balboa” in addition to performances by Callaway Middle and High Schools.

Wamsley has been at Callaway High School for eight years and wears a number of different professional hats. He serves as the band, chorus, guitar and music technology teacher, working with a wide array of students throughout the high school. When concocting the idea for the concert, he wanted to put an emphasis on unity and involvement, focusing on attracting the interest of younger students.

“I think it’s really important for the growth of the fine arts program to get kids involved and see what’s going on from early ages,” Wamsley said. “I think this is an important thing to create unity within the Callaway zone.”

Wamsley pulled from personal experience when determining the format for the event, and wanted to put a premium on fun.

“I’ve seen festivals like this before,” Wamsley. “My dad did an event like this when he was a director, they had a similar-type feel. Normally at concerts you don’t talk, people are stingy, but sometimes it’s fun to loosen up and have fun.”

Following the Hogansville Elementary students’ performance, the Callaway Middle and High School Choruses performed separately, which were followed by the middle and high school bands, while the culmination of the event was a performance by the Callaway High School Advanced Guitar class.

Burn ban in effect for Troup, others