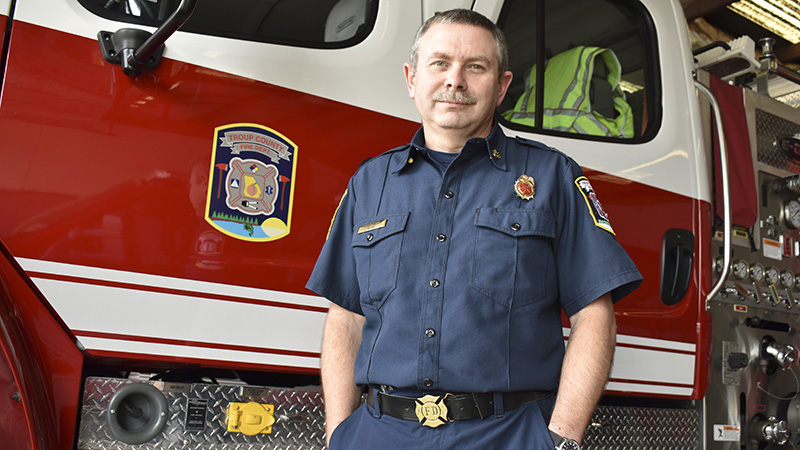 Troup County Fire Chief Dennis Knight will be taking on a new role with the fire department in the coming months and a new fire chief will soon be selected.

County Manager Eric Mosley said that Knight will be moving into a new EMA director/training officer position with the county. Mosley said Knight had expressed interest in a position such as this about a month ago.

“He sat down with me and shared how much he enjoyed the emergency management side of his job,” Mosley said. “I called him back and asked if he would be interested in doing it now. This allows him to focus on the big picture things he wants to focus on.”

Knight has served as the Troup County Fire Chief for four years, but he has been working with the fire department since starting as a volunteer in 1985.

“He’s a great guy. Wonderful man of ethics, man of integrity and someone I have really grown to trust and count on,” Mosley said. “He definitely has a tremendous amount of knowledge and has great respect from his men and his community as a whole.”

Mosley said the fire chief position was posted Friday, with a goal to have someone in place by July 1. The job will remain open until filled.

“We just want the right man or woman for the job,” Mosley said.

Mosley said the new fire chief will shadow Knight before jumping right into the job.

“We don’t want to throw a brand-new guy to the wolves,” Mosley said.

“The greatest thing is solid management experience. In a role as fire chief, understanding fire management is important, but more importantly it’s the big picture items like human resources, policy and procedure and tactics.”

The position requires a baccalaureate degree in fire administration, public administration or a closely related field, according to the application on the county website. The chief also must have eight years of fulltime experience with a paid or combined paid/volunteer fire department, and must have five years of supervisory and administration experience in a managerial and command position of battalion chief.