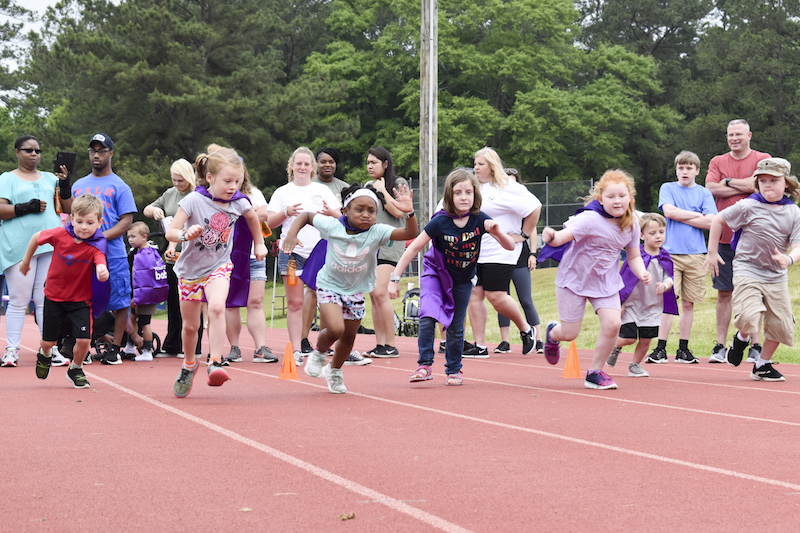 Children take part in the Superhero Sprint at Troup March for Babies on Saturday. - Alicia B. Hill

On Saturday morning, 1-year-old Jay Jackson ran as fast as his legs could carry him as he latched onto his grandfather’s fingers during the Superhero Sprint at Troup March for Babies.

Close to half-way through the sprint, Jay, this year’s ambassador for Troup March for Babies, found a few members of Team Jay Bird he needed to say hello to, which he did eagerly before joining his parents, James and Stephanie Jackson, on stage. The Jackson’s then shared his story and the importance of March of Dimes.

“Jay was born three months too soon at 25 weeks,” Stephanie Jackson said. “I had a healthy pregnancy — what I thought was a healthy pregnancy — and everything was normal. All of my appointments looked great, then about a week before he was born, I thought to myself, ‘I’m going to start eating more, because if he comes early, I really want him to be fat.’ About a week later, he was born at 25 weeks weighing two pounds and five ounces, which believe it or not is pretty fat for a 25-week-old baby.”

Stephanie said that when Jay was born, doctors expressed that he had a 50 percent chance of survival, and for the next two months he lived in the Newborn Intensive Care Unit.

“For the next 62 days, he was in Columbus at the NICU there,” Stephanie said. “After four days, we were able to hold him for the first time. After that, James and I were able to take turns holding him. Every day, one of us could hold him for one hour, for the 62 days that he was there.”

Stephanie said that one-hour daily limit sometimes led to arguments over who got to hold Jay, since that time never felt long enough.

“As you can imagine, only being able to touch your baby or hold your baby for one hour every other day is quite a challenge,” Stephanie said. “Thankfully he had a very successful story, as you can tell.”

Jay still had to have physical therapy for most of his first year, and he had to have eye surgery due to a problem caused by his premature birth. However he is healthy now, and Stephanie said that one of the reasons why her family is passionate about March of Dimes is because they realize how lucky they have been.

“One of the reasons we want to keep marching and keep raising money for this amazing organization is because of the families that don’t have the success story that we have,” Stephanie said. “There are a lot of babies that are not graduating from the NICU, and even though we are here to celebrate Jay, we also don’t want to forget the babies that are lost while they are in the NICU or before they get to the NICU.”

According to WellStar Vice President of Human Resources Tommy Britt, WellStar West Georgia welcomes an average of 950 or more babies into the world annually.

“Like all of you, I want to live in a world in which healthy moms and strong babies are a priority for us all,” said Libby Willigham, the 2019 March for Babies Chairperson. “That is why we are here, and that is why we are marching. We walk for the help of all moms and babies. We remember those babies we lost and honor them with special tributes throughout the day.”

That desire to help mothers and babies brings many teams and volunteers back year after year.

“This kind of hits home,” said Renita Russell of Interface, who is a longtime volunteer and Circle of Champions member. “I was a premature baby. … After reading that [information about March of Dimes], I created a team, went forward. For the last 27 years, I have been the captain for Interface.”

As of Monday, Troup March for Babies had raised $64,018 of its $120,000 goal. This year the event took place at Granger Park instead of Hollis Hand Elementary School due to construction on Country Club Road.

To check on the fundraising status of Troup March for Babies, to donate or for more information, visit Marchforbabies.org/EventInfo/?EventID=20036.