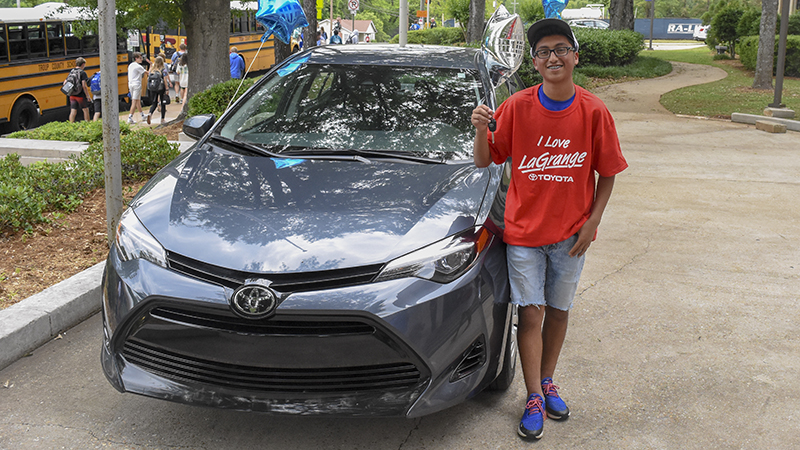 Good behavior, passing grades and near-perfect attendance paid off Thursday for a LaGrange High School senior in a big way.

Jason Recinos-Mendoza, 16, won a brand-new Toyota Corolla after making it through a random drawing of 432 students and then a final drawing between the final 10 names.

“I was surprised,” said Recinos-Mendoza, who had a chance to crank the car and sit in it after drawing.

This is the second year that every high school in the Troup County School System is giving away a new car to a qualifying student. Callaway High School’s drawing is Friday and Troup High School’s is May 17.

Students had to pass all classes, miss no more than five days of school and have no discipline referrals to qualify.

“Jason is a really good kid, a good student,” said assistant principal Jamie Bozeman. “Just listening to all the comments made by students and teachers in the gym, they were saying it couldn’t have happened to a nicer student and young man.”

Based on the numbers, the car incentive appears to be working.

“We placed a huge emphasis this year on all three components that are the requirements to win this car — student attendance, we harped on that all year long and made it important; grades … and our discipline numbers were down this year,” Bozeman said.

Wilson was attending his wife’s college graduation and wasn’t able to be at Thursday’s ceremony. He’s an algebra teacher in LHS’ Freshman Academy.

“It’s going to be a good little gift for Chase. He and his wife just had a baby this semester, so a new addition to the family and they get to go on a week’s vacation in Panama City at a condo,” Bozeman said.

The Toyota was donated by LaGrange Toyota and owner Michael Stogner, a 1988 LaGrange High graduate.

“This is my hometown, so any way I can help out, I love it,” Stogner said.